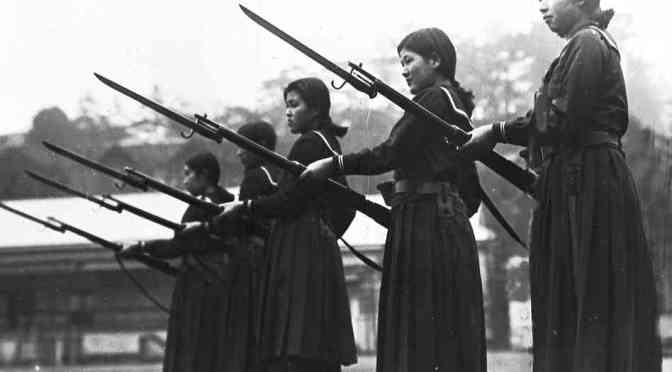 Japanese women being given “home defense training”. My grandmother on my mother’s side underwent such training on a Tokyo schoolground. 1945.

The Japanese home front had essentially collapsed by 1945.  Instead of focusing on food, supplies, building air raid shelters and organizing orderly evacuations of civilians, Japanese military leadership focused on misleading news reports and propaganda.  Millions fled the cities into safer rural areas(¹) on their own initiative but once there, supplies of daily sustenance was meager.

In one’s own life, you are tested.  A good human being will at times prove oneself to be a good brother or sister, son or daughter, friend or life partner.  Some fail.  Some pass.

Aunt Michie was one who passed; her heart led her to care for others before herself.  It is as if she knew being good to others was the way to have a good life.

As an example, US air and naval forces ruled the skies and the seas.  A key staple of the Japanese diet – fish – had been nearly cut off  as fishing boats were attacked once out to sea.  Yet, when Aunt Michie came across sashimi, she traveled hours with Masako in tow to take a precious portion to her brother Suetaro at his army base in Fukuoka:

“…(Masako) remembers a couple of trips (to see Suetaro). It was not easy travel in war-torn Japan.  For one trip, Aunt Michie managed to take sashimi – in this time of little food, it was a tremendous treat and gift. On that trip, Masako remembers her mother stealthily sliding over to Uncle Suetaro the wrapped sashimi. He was being stared at by many of his fellow soldiers – they were not well fed either.  She remembers Uncle slowly turning so that the others could not see and quickly devoured the treat.”

(From Masako and Spam Musubi)

Aunt Michie could have eaten the precious sashimi herself…but didn’t.

With her husband taken by the Imperial Japanese Army then dispatched to war in Manchuria, she was burdened with running the farm… still laboring to produce crops only to be taken by the military.  She would get up before sunrise, help prepare meals, tend to the family then toil in the fields.  And when her mother became partially paralyzed and alone in her own home five miles away, Aunt Michie knew she had to take care of her, too.  Michie was the last of her children left in Japan.

While Michie and Grandmother Kono managed to get part-time care, Aunt Michie still took it upon herself to check in on her stricken mother.  My cousins tell me their mother Aunt Michie would take them along for the ten mile round trip to her Kanemoto family home.

No car.  No bus.  No taxi.  No trains or bicycles.  They had to walk.  After all, it was 1944 and fuel was a huge luxury.  One memory the youngest happily recollect is that they would take turns riding in some kind of baby stroller that Michie would push to Grandmother Kono’s.  Neverthless, it was still a great deal of effort and sacrifice on Michie’s part in any case… and she did this after working in the fields, too.

Masako will eventually end up caring for Grandmother Kono.

After picking herself off the ground, Aunt Michie saw an evil yet mystifying mushroom cloud slowly rising up beyond the 300 meter tall hill separating her village from Hiroshima proper.  At that instant, she knew her life had taken a wrenching turn for the worse… as if it could get any worse.

I cannot imagine what was going through her mind and heart watching that mushroom cloud rising.  She could not have even dreamed that it was one massive bomb, kilometers away, that could cause this sort of force and devastation.  It must have defied belief.

According to Michie and my cousins, the shockwave blew out all the sliding doors, all the tatami mats were flung and the ceiling was shoved up in the house.  Try to imagine yourself being inside the house.  The same thing happened to Grandmother Kono’s house five miles south (See map in Part 1).

As per their daily air raid drill, they apparently all ran to the air raid shelter in the small hill behind their house.  After about half an hour and with the mushroom cloud still rising, a black, syrupy rain began to fall on them.  According to the cousins, Michie believed that the Americans were dropping oil from space.

She could not have fathomed it was contaminated with over 200 kinds of radioactive isotopes.  We now call it black rain.

Sadako, who was ten years old, clearly remembers their white blouses had turned black from the rain.  No one – absolutely no one – knew that other than staining skin, clothing, and buildings, but that ingesting black rain by breathing and by consumption of contaminated food or water, would lead to radiation poisoning.  Even flowers would bloom in distorted shapes and forms from the radiation.

With the enormity and the suddenness of the brilliant flash of light followed by a shockwave and the swirling mushroom cloud, Michie deep inside knew her world had forever changed.

Horror was to literally come into hand shortly to enforce that foreboding thought.

To be continued in Part 4….

(1) Albeit late, my mother’s family fled to the Fukui Prefecture in early July 1945 to escape the bombing of Tokyo.