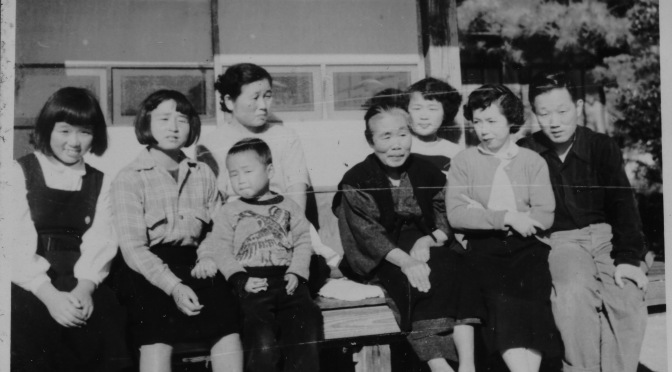 “When it comes to giving, some people stop at nothing.”

That was Aunt Michie.  She gave all of herself and of her life strength to others because her heart knew no other way.

At the moment Aunt Michie watched the ugly mushroom cloud rise from her field that day, her older siblings – my dad, Aunt Shiz and Uncle Yutaka – were all imprisoned in the “war relocation centers” scattered about the United States.  These were truly prisons and the popular view is that FDR imprisoned them “for their protection” because they looked like the enemy.(¹)

Life within these “camps” was “sub-standard”.  They were forced to live in small, shoddily built wooden barracks covered only with tar paper with little or no privacy.  No running water inside their barracks – they had to go wait in line outside, whether it be rain, snow, dust storm or searing desert sun to use public latrines or showers. Food was served in mess halls on pot metal plates at specific times, just like in the military.  The food was miserable according to Dad and worse yet, they had to wait in line again.  For the first month or so of imprisonment, he said all they had was liver, powdered eggs and potatoes.

But then again, he said it was food.

Aunt Michie and her family were near starving in Hiroshima while dad was imprisoned in the good ol’ US of A.

It is assumed like for the rest of America, Dad and his older siblings heard the news of the atomic bombing but while in the camps on or about August 8th… that one enormous bomb had wiped out Hiroshima.  There must have high anxiety and anger as many of the inmates in Dad’s camp (Minidoka) were from Seattle; they had family in Hiroshima as their parents had immigrated from there.

My cousins tell me that sometime after war’s end, Michie’s “American” siblings – my dad, Uncle Yutaka and Aunt Shiz – managed to re-establish contact with Grandmother Kono and Michie.  With the Japanese infrastructure destroyed, it was a miracle.  And it was no easy task as letters to and from Japan were not only prohibited, it was impossible.  There was no telephone in the villages where Grandmother and Michie lived.

But her American siblings somehow managed to send much needed clothing to them.  When my father finally reached Hiroshima while a sergeant in the US 8th Army, he carried two duffle bags full of C-rations, candy and Spam.  They said it was a feast for them after years of hunger.

Sadako (who savored the white rice Michie made them on the day of the bomb) told me at a farewell dinner two years ago that she fondly remembered my dad taking them to a market of some kind where he bought her a little coin purse.  She remembered Dad gave her the money to buy the little purse and was told she could keep the change.  She remembers then handing the change – which was a LOT of money back then – to Michie who humbly accepted it.  Sadako said she cherished that little coin purse for years.

From exhaustive laboring on her farm… to taking precious sashimi to her brother Suetaro… to walking ten miles with children in tow to care for Grandmother Kono after her stroke… to the pain of learning of her brother being killed in action… to being thrown onto the ground and watching a huge mushroom cloud rise over a small hill… to pulling a wooden cart over a hill…  to tirelessly aiding the victims… and most of all, sacrificing her own health for the sake of others…

She never gave up in those thirty years.  Would you have? I don’t believe I would have had the fortitude.

But because her soul would not quit, she got everyone to tomorrow… but in doing so, her own tomorrows dwindled.

Michie is still here.  The fruit of her sacrifices can be seen today in her six children, all of whom have lived – and are still living – full, joyous lives.

They have their mother, Michie, to thank and they cherish that… and that they were all there at the farmhouse when she looked at each one of them intently one last time before leaving this world.

A most grand mother.

They all love food to this very day.

I wish to deeply thank my Hiroshima cousins for sharing their memories of their life with Michie with us.

Like all Hiroshima citizens I have met, they simply pray for peace.

(¹) There are declassified US intelligence documents which show that a small number of Japanese and Japanese-Americans were performing espionage.  Intelligence was able to determine this by intercepting and decoding secret Japanese communications. This information was given a cover name of MAGIC and these documents were typed up for FDR and a very small number of trusted officials.  However, rounding up the spies would clearly indicate to the Japanese that their code had been cracked.  These documents present another view contra to the widespread belief that FDR imprisoned the Japanese and Japanese-Americans from discrimination and war time hysteria.  In other words, FDR used that hysteria as a cover story; by doing so, he was able to remove the “spies” from the West Coast without alerting the Japanese.  FDR also stated in communications that there would be “repercussions” from such action.