During WWII, receiving a package from home was the ultimate morale booster for our boys in uniform.  These packages brought tremendous joy to the men, especially when they were near or at the front, subjected to the brutality and extremes of environments.

Upon experiencing the joy of receiving a parcel, very little could surpass finding the lingering scent of their girl’s perfume on a knitted muffler; candy and gum ranked up there, too.   Socks were also in high demand as socks wore out much more quickly than sweaters or mufflers and dry socks were essential necessities to ward off trench foot.  Indeed, trench foot¹ and frostbite took their toll on our boys in battle more than being wounded by bullets or shrapnel.

While machines produced millions, there were even “knitting parties” where women knitted socks, scarves, vests and “fingerless” mittens.  In fact, Eleanor Roosevelt just months before Pearl Harbor founded a “Knit for Defense” effort in the US.

But within today’s capsule of electronic bliss, many of us civilians in all walks of life see no difficulty with a family trying to communicate with their loved one who is not at home because he/she is in uniform.

Even packages from home are viewed as no big thing anymore by the general public.  They are taken for granted by many civilians because the packages leaving the front porch seem to be riding on a beacon radiating from a soldier’s open palms now – think FedEx.  Perhaps this could be one possible reason why so many Americans seem to feel gifts from home are “no big deal”.  They see our men in uniform as being as close as a laptop.  That is far from reality as are many TV shows.  They still long for home.

One thing hasn’t changed from World War II: the morale-boosting smile that erupted on a soldier’s face when he received a package from home.

So what got me thinking about these now long-forgotten packages from home that brought so many smiles to GI Joes on a WWII battlefield?

My oldest daughter Robyn spearheaded an effort with family and friends to bring together hundreds of donations to be sent anonymously to our military through the efforts of a non-profit organization called “Operation Gratitude“.  Among many other essentials, there were razors, hand wipes, sunscreen, foot powder, Chapstick and most importantly, letters from students thanking the unknown recipient for their service to our country.  In addition, Robyn purchased thousands of yards of “paracord“.  It had to first be cut in 7.5 foot lengths; then, the open ends have to be sealed with a small flame.  These were then hand braided into survival bracelets – 300 of them.

Through their volunteers and generous donations from the public, Operation Gratitude has delivered over 1.4 million parcels so far!

These smiles make it all worth it, yes? 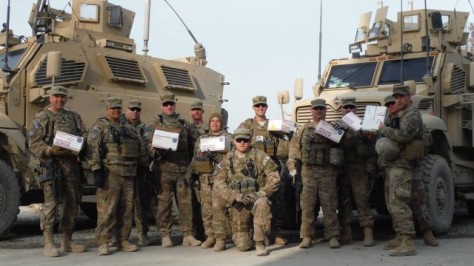 The Journey of a WWII Package

During WWII, a package sent from home took weeks if not months for a soldier to get it…  Or in the worse possible scenario, the young man would never receive their package from home because they were either killed or missing as this photo below graphically shows.  It would exponentially worsen for the family as they would have likely received the infamous telegrams only to have the battered package marked “DECEASED” left at their doorstep many weeks later:

The packages from home would make their way via ship.  For the European Theater of War and before D-Day, a number of supply ships were likely attacked or sunk by U-Boats.  After surviving the voyage and unloading at a European port (permanent or man-made like at Normandy), the packages, along with sacks of mail, would be transferred to trucks.

Europe did have mapped roads making delivery somewhat more certain but the trucks were subject to destruction via enemy air attacks, shelling or road mines.  I understand mail pieces were primarily sorted at battalion headquarters then filtered down to a company or OP level which could be moving in the course of battle.

Making it to the individual soldier was not a sure thing.  The package would have to make its way to the platoon then to the individual soldier’s last known position.  Perhaps there was a makeshift “post office” but if the front was fluid, their location would be a question mark.  Communication with a unit on the move was by field radio with an average range of five miles or so until actual phone lines could be reeled off (above).

It was MUCH less certain for Marines serving on those islands scattered about in the Pacific.  For example, the package may never get there as a ship would be sunk or damaged, would rot in humid cargo holds exceeding 130F, or the Marine just couldn’t be located because they kept moving, especially if in combat.  Communication was a wild card and without it, finding the Marine’s location was difficult.

On these sweltering Pacific islands and unlike Europe, few or no roads were the norm until the engineers came ashore to build them.  Mud greeted the Marines.  Any dirt road became mud rivers and muddy hills made it worse.  When mail did reach their island, the mail drops on many an occasion were truly drops – they were pushed out of cargo planes with parachutes at low altitude: 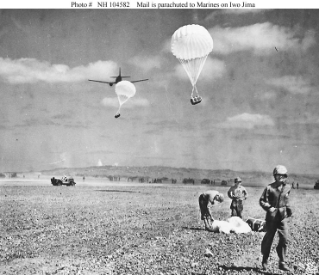 In some Pacific battles, mail would be delayed as there were no “front lines” on these islands for some time.  Iwo Jima was a typical one as the enemy for the most part were hidden underground and would pop up out of holes and caves to kill.

Today, we frequently call packages sent either from home or from efforts like Operation Gratitude “CARE packages”.

During WWII, the American Red Cross spearheaded monumental efforts (below) to produce Prisoner of War packages.  They were not called “CARE” packages as of yet.

More than 27 million parcels were prepared by over 13,000 volunteers and shipped by the American Red Cross to the International Red Cross Committee in Geneva, Switzerland, for distribution in the POW camps.

These packages may have included:

Prisoners held by the Germans did better than those in the Pacific.  While many packages were intercepted by Nazis and used for their own use, the Japanese provided almost no cooperation to the International Red Cross efforts.  In some cases, the prisoners in German POW camps would keep only the cigarettes and chocolate then “volunteer” the rest of the food articles to the Nazi camp cooks.

However, the actual term of “CARE Package” did not pertain to these life-saving parcels.  Instead, “an organization called CARE was founded in 1945, when 22 American organizations came together to rush lifesaving CARE Packages to survivors of World War II. Thousands of Americans, including President Harry S. Truman, contributed to the effort. On May 11, 1946, the first 20,000 packages reached the battered port of Le Havre, France.”²

All in all, Operation Gratitude fulfills both roles: the precious package from home combined with the CARE package concept.  With the economy the way it is and coupled with the unacceptably low budget for our military, I feel these packages do bring smiles to our men and women in uniform.  It tells them that in spite of how the media chooses to report on mostly negative incidents involving them, it shows millions of us support them 100%.

A crisp salute to Operation Gratitude, my daughter Robyn and of course, our men and women wearing our country’s uniforms so proudly and valiantly.

29 thoughts on “WWII – Packages from Home”