Housing in the cities, however, was extremely tough.  As an example, after many cities were bombed out, millions flocked to Kyoto.  MacArthur and other Allied military leaders omitted Kyoto as a target for its ancient cultural richness.  Many Japanese had heard of that by war’s end and trekked to Kyoto in hopes of finding a roof over their heads.  Unfortunately, all living spaces were occupied.  No rooms were available, even at a huge premium.

Even in 1948 – three years after war’s end – Tokyo still had tremendous scars as can be seen in one of my father’s photographs below:

Soon after the bomb was dropped, the hostilities finally ended.  However, food and essential goods continued to be largely absent.  Amazingly, my cousins who went through that hell choose to reflect on these post-war years positively.  That is, reflecting on it as a miserable time will but cause a wound to fester.  They had seen enough of festering wounds.

But let us step back a year in Aunt Michie’s life.

One month before the surrender, Grandmother Kono was informed by the remnants of the Japanese military that her son Suetaro was killed on Leyte fighting as an Imperial Japanese soldier.  The date of death was recorded as July 15, 1945.  The Emperor capitulated just one month later.  Of course, we have no record of that communication nor when Grandmother Kono was actually told, but the bomb was dropped just around this time, we believe.

A little more than a year earlier, around March 3, 1944, Suetaro walked to Tomo and Masako’s school.  He wrote a farewell note on a chalkboard at Masako’s elementary school to say good bye as he was off to war.  Masako remembers he had written to be a good girl and that he was sorry he couldn’t say good bye in person.  The family took their last family picture with Suetaro (Part 2); he was flanked by his older sister Michie and Mikizo.

We believe the next day, Aunt Michie went to the train depot to say good bye to Suetaro.  She was very fond of him and “his American citizenship”.  Everyone loved the fun Suetaro and she apparently talked of him often after his death.  But at that farewell, deep down, she knew it would be the last time she would see him.  I wonder how she felt watching the train disappear.

Soldiers rarely came back.  Per tradition, he had left Grandma Kono some of his nail clippings and some of his hair.  That is what is in the family crypt.

For hundreds of thousands, entire bodies would never be found.  This was true for America, England, Australia, Russia or Germany.

But at least part of him remains there in Hiroshima.

The cousins tell me Aunt Michie grieved for days after his departure… and that she was torn apart when she learned of his death.

According to the family, even shortly after the bedlam caused by the bomb, Aunt Michie continued to care for her stricken mother by walking to her house five miles away when she could.  My dad said the road was “pretty” level but that since it is Japan, there were hills along the way, especially near Ishiuchi, a small village.

In December 1947, Aunt Michie started to have contractions while walking over such a hill.  She was able to make it to Grandmother Kono’s house where she gave birth to Kiyoshi, right then and there.  No, no doctor…no nurse… and Grandmother Kono could not help due to her stroke.  It is said she was very happy that the birth took place at her childhood home.  She grew up there along with her American siblings.  She had felt safe.

My cousins believe their mother, Aunt Michie, gave all of herself for her children and her family.  In spite of malnourishment, she toiled in her farm’s fields, cared for Grandmother Kono, gave her all in the bomb’s aftermath, set the example for her children.  She put everyone before her.

But soon after giving birth to Kiyoshi, she developed kidney problems.

They tell me that medical care then was still pretty non-existent so she had no choice but to ride it out.  However, she pushed herself back into working the farm too soon to care for her children, her own stricken mother and other household duties.  That was Aunt Michie.

Cousin Kiyoshi remembers massaging his mother’s swollen legs after a day’s work.  He also fondly remembers perspiring trying to keep up with Aunt Michie on a hot, humid summer day as they walked up a hill overgrown with thick, green wild grass.  There was a “石じぞう”, or a stone figure representing Buddha, alongside a ridge overlooking a blue Hiroshima Bay.  Kiyoshi will always remember that moment, looking at his mother with perspiration running down her face and the blueness of the bay.

In retrospect, they feel that if Michie had taken some time to rest and more often that she may have regained her health.

On May 29, 1963, she was laying in the same farmhouse in which she nursed the 23 injured people that fateful day.  Her kidneys were giving out.  She opened her eyes one last time and looked lovingly at each of her children who were gathered about her then closed them.  Thirty years after her father gave away her hand in marriage at 19, after 30 years of a life heaped with physical and emotional demands one after another, world changing events and family tragedies…  After enduring the pain of survival, Aunt Michie left this world.  She was but 48. 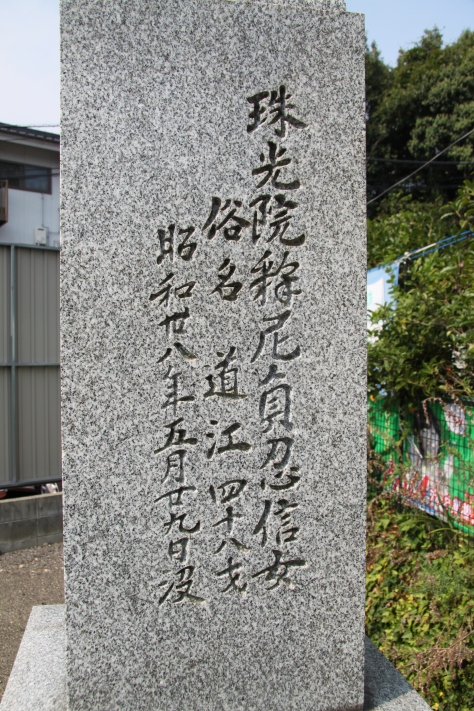 Aunt Michie conquered all and gave her life to others so they could get to tomorrow… and she did that with dignity and unconditional love for her children.