There is personal pain in a full-fledged war that only those who were fully involved can feel.  Those feelings will differ by how that person was involved.

We somewhat understand through survivors that a soldier, airman, sailor or Marine near or on the front lines will have an intimate kinship with instantaneous fear.  They know combat is immediate, unfair, cruel, and barbaric.  But hopefully, they know their families and country are behind them – perhaps giving them the edge to overcome their fears and survive.

And this is true for the enemy as well.  As I become more knowledgeable on the Pacific Theater during WWII, I have learned the young Japanese combatants had the same fears (please see “There’s No Toilet Paper in the Jungle of Burma“).  But unlike the Allied forces who had millions of tons of war materiel, food and medical care backing them, the Japanese military fell way short.

But what about the Japanese home front?  Have you paused to ponder that?  Were their countrymen any different from us in their ways of supporting their young men dying by the hundreds of thousands?

I never did myself until recently.

I met Rob on the internet through his facebook page, “WWII U.S. Capture Photos“.  He focuses on the spoils of war, bringing back to the forefront the war souvenirs seized by military personnel.

He acquired a letter from a now elderly Marine who was fighting on Saipan in mid-1944. He had told Rob that he removed it from a Japanese corpse.

Apparently, this letter had ended up to haunt the Marine who was at time very young and fighting for his life on Saipan.  The once young Marine is pictured in the center of this photo:

Rob asked if my father could read the letter and translate it.

The letter was haunting Rob, too.

My friend and I went to see Dad in October 2013.  Below, Dad is reading the letter taken by the then young Marine from Saipan in 1944.

The backside of the envelope is below showing the sender’s name and return address.  The image was enhanced to bring out the writing.  The Marine had written “Japanese letter picked up on Saipan”.

The letter was anonymously addressed and sent by a young girl named “Kazuko Arai (荒井和子)”.  The return address shows she was a student of a girl’s economics school in Tokyo, Nakano City, town of Honcho (東京都中野区本町通六丁目女子経済専門学校 – 附属高女).  While I believe the school may have been at least damaged by the fire bombings, I may have located the successor school. It is called “Nitobe Bunka Gakuen” with its current address as 東京都中野区本町6-38-1.  (While I did send a blind email of inquiry to them in my far from perfect Japanese, there has been no response.  I doubt that there will be given the Japanese culture.)

While the scans were of low resolution, the two pages of the letter are as follows: 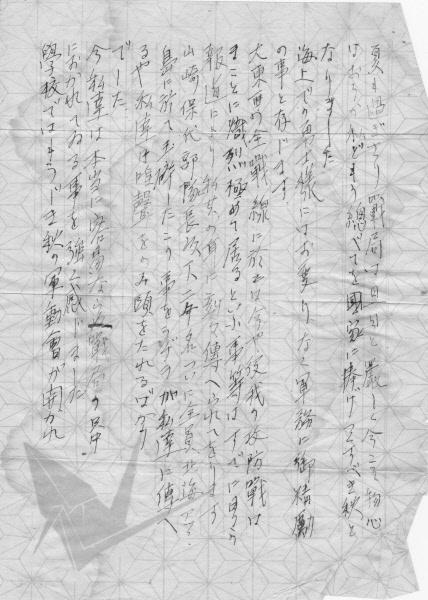 Because my father  will be 95 next month, it was difficult to keep him on course.  In spite of reminding him to just read the letter in Japanese (I would understand most of it), he continually tried to translate its sentences into English.  Perhaps somewhere in his buried conscious, he is doing as he was trained by the US Army’s Military Intelligence Service.  Admittedly, there were about a half-dozen characters that were just tough to make out due to creases and lack of clarity.  And he wasn’t able to figure out one paragraph in particular…but I did!  Got one on my old man.

I also sought out help from my good Hiroshima cousin, Kiyoshi, and he filled in the blanks.

夏も過ぎさり戰局は日一日と厳しく今こそ物心はおらか私どもう総べてを国家に捧げつくすべきと秋となりました。
As summer passes and turns into autumn, the war situation is getting more severe and now we must physically and mentally dedicate ourselves for our country.

海上での勇士様にはお変わりなく軍務に御精勵（励）の事を存じます。
As a courageous sailor out at sea, I know your unwavering fighting spirit continues.

大東亜の全戦線に於いては、今や彼我の攻防戦は、まことに熾烈極めて居るという事等、すでに日々の報道により私共の耳に刻々傳えられてをります。
Per our (radio) broadcasts, we hear that the intensity of battle and such has increased for both sides at all the front lines in the Far East Asia theater of war.

山崎保代部陽長以下二千名ついに全員北海の島に於いて玉砕したこの事をラジオが私達に傳へるや私達は唯聲をのみ頭をたれるばかりでした。
A radio broadcast announced that Lt. General Yasuyo Yamasaki and 2,000 of his  garrison died honorably defending an island in the North Sea.  All we could do was bow our heads (in honor) and swallow our  grief (voices).

[ NOTE: In researching this report, I discovered that Lt. General Yamasaki was assigned to defend the island of Attu.  He was killed with his remaining garrison in a banzai charge on May 29, 1943.  Please click on the following for more information:
Lt. General Yasuyo Yamasaki (machine English translation)
Lt. General Yasuyo Yamasaki (Original Japanese)
Photo of Lt. General Yamasaki ]
My cousin Kiyoshi also found an extensive accounting of the Battle of Attu in Japanese with English translations for those who are interested.
Japanese version of the Battle of Attu

今私達は本当に容易ならぬ戰争の只中におかれている事を強く感じました。
Now, with the daily war situation, we strongly feel as if we are in the midst of the battle and realize (winning) will not be easy.

学校ではもうじき秋の軍動會が開かれますので一生懸命身体をきたへてをります。
Soon, it will be time for the autumn (military) athletic meet; I will train hard to strengthen my physique.

断じて米英女性には贁けない覧唔です。
We resolve to not lose against the American and English women.

ではどうぞう勇士様くれぐれ御身体御大事に大切にお国の為しっかり戰って下さい。御武軍を祈り致します。
So please, courageous sailor, sincerely take good care of yourself and fight hard.  I pray for your fighting spirit.

So now we realize that Japan also had a “home front”.

Perhaps they did not have a “Rosie the Riveter” like we did.

But the Japanese homeland did endure pain, fear and sorrow as we did…and depression.  They were not the inhuman creatures depicted on war posters and in propaganda of that time.  And thanks to Rob and the young Marine, we see a letter written in Tokyo by a high school girl named Kazuko Arai in the autumn of 1943 and simply addressed to an anonymous sailor.  Kiyoshi also believes that the watermarked stationery was of high quality and issued out of military stock for this purpose.

Sadly, we do not know the name of the sailor from whose corpse the letter was removed from, nor do we know if Ms. Arai survived the war and raised a family.

Things like this sort aren’t evident in our (current) history textbooks.  Now, WWII has pretty much been erased from school textbooks altogether, replaced by “politically correct” topics…that there was simply a war between Japan and America.  A disgrace to those who endured or died.

In closing, there is a diary written by a young Japanese doctor up to the time of the final banzai charge on Attu.  He was one of the attackers who was killed.  As mentioned in my other posts about the Military Intelligence Service, Japanese military forces were allowed to write diaries.  When these diaries were taken from the battlefield, the Japanese-Americans (Nisei) soldiers were able to read then extract valuable intel on the enemy – both for their battle front and their homeland.  In his last entry, the young doctor writes a goodbye to his wife and two small children back home. 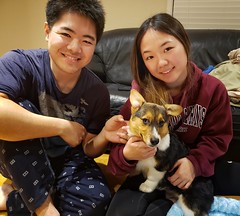 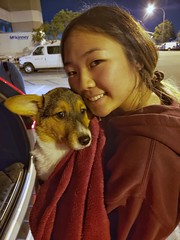