My girl friend Linda fretted for a couple of weeks before going to Japan with me.

She fretted about the (we-know-they’re-coming) typhoons.

She fretted about the (we-don’t-know-they’re-coming) earthquakes.

But what did she fret about the most?  She fretted about getting butt-naked in front of my cousins for a Japanese-style bath at a hot spring in Japan.

Silly lady…  All Japanese do that.

Oops.  I forgot.  She is Irish with blue eyes.

Well, I guess if I were her and experiencing a panic attack, I’d just put a brown paper bag over my mouth… and drink all the scotch inside.

That would help.  After all, she is Irish.

During our ten-day visit to Japan in November, my cousin Kiyoshi (Masako‘s youngest brother) treated us to a most wonderful journey to Toyama Prefecture, just inland from the Sea of Japan.  One such destination was famous for its hot springs and a beautiful gorge. We stayed at the inn called “Entaijiso (延対寺荘)” near “Unazuki Hot Springs (宇奈月温泉).”  Started in 1900, the hot spring’s water is naturally heated to a most perfect temperature and has an open-air spa area called a “rotenburo (露天風呂)”.  Literally, you are soaking outside under the heavens.  Butt-naked.

Of course, I was unable to take photos inside the bathing area for obvious reasons but here are other photos from their website to give you a taste of the relaxation that can be had. 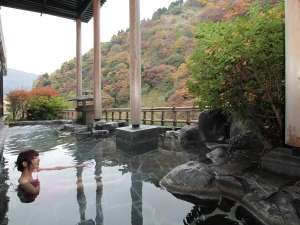 Yes, my Irish lady did go in with my (female) cousins!  In a form of endearment, my cousin Masako even washed her back.  Butt naked.  After relaxing in the water for a while then dry off, you notice your skin is just ultra silky smooth.  My cousins did say the geothermically heated ground water has therapeutic powers…  That there is some kind of magical healing power bubbling up.  I kind of doubted it.  But there IS something in the water. 🙂

Their dining area was spectacular; just outside is the river and magnificent mosaic-colored hillsides – a post card panorama. 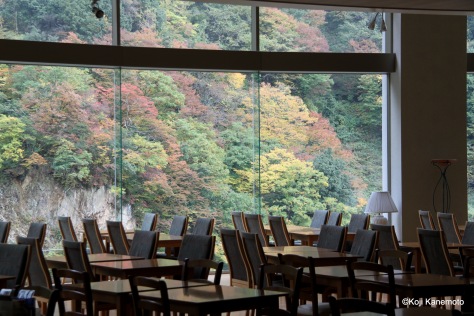 Kiyoshi’s gracious treat continued on the Kurobe Gorge Tram (黒部峡谷トロッコ).  It is a a sightseeing train running on a very narrow track originally built to aid the construction of the Kurobe Dam.  It follows a winding path along the river – something like 20 kilometers from the base station of Unazuki to the end.  We we there unbelievably at their peak of the autumn color change.  It is important to note we hiked a bit after getting off the tram at Kanetsuri Station – and my cousins below LED the way.  While Masako has difficulty going DOWN stairs, she was a jack rabbit going up.  Amazing.  At 80 years of age.

I will let the photos show you the grandeur we were so fortunate to experience.  (Please note many of these were taken from the moving tram.) 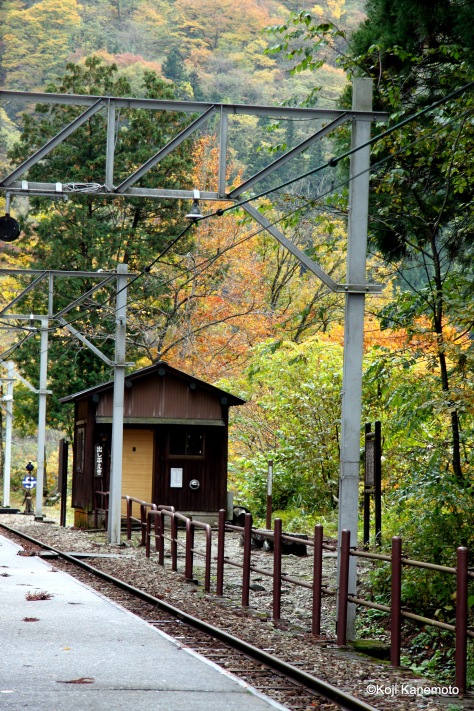 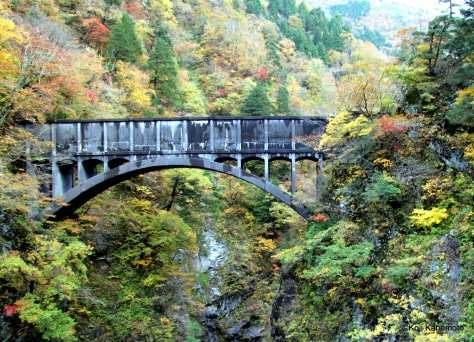 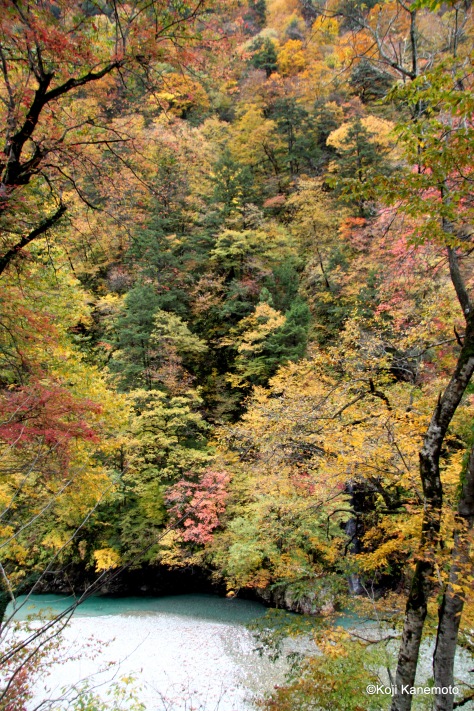 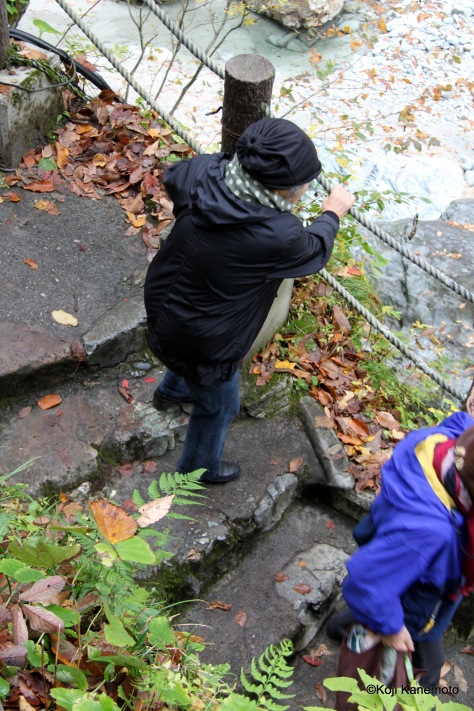 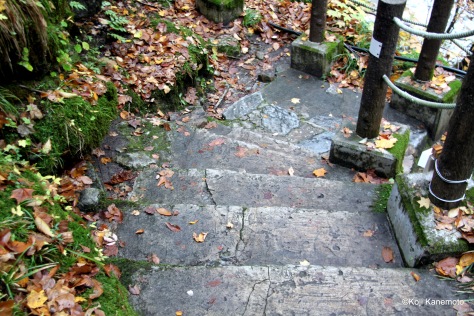 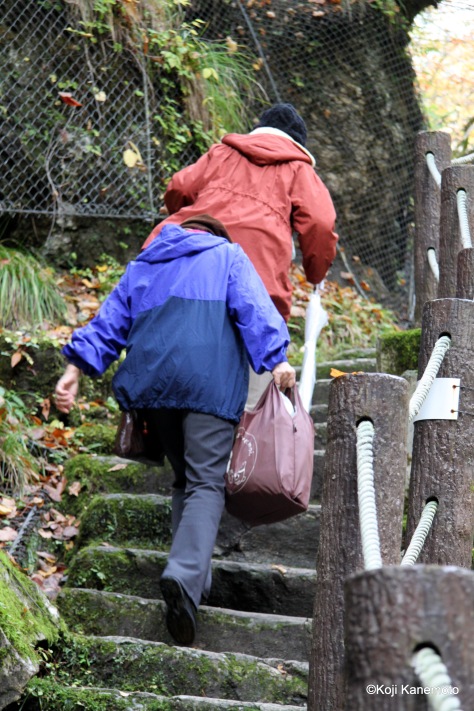 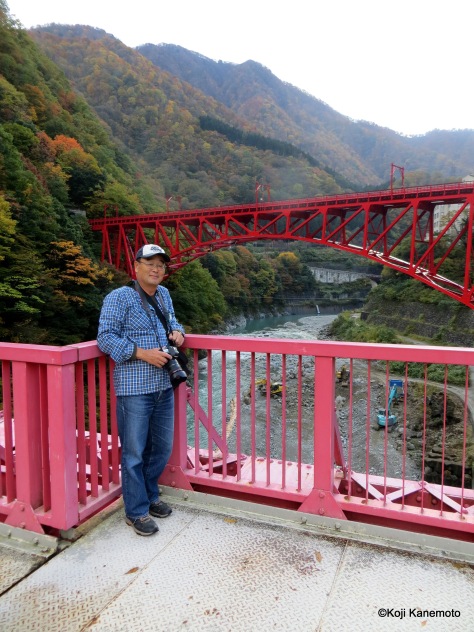 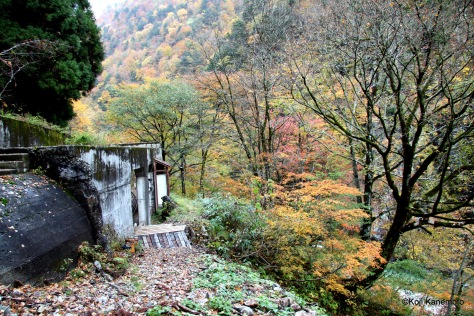 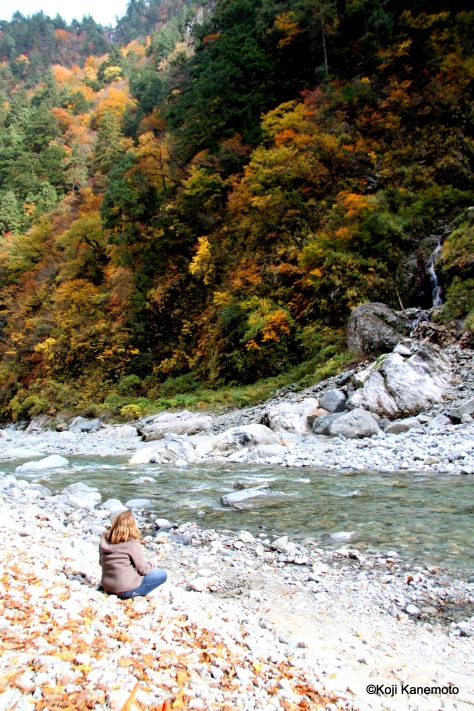 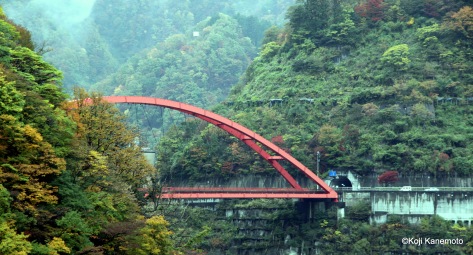 AND A “I SPY WITH MY LITTLE EYE”…  Can you spot it?  There is a wild red faced monkey below.

Prior to getting into the hot spring and public bath, I tried to relieve her anxiety.

She replied, “They sinned.”

I was proud of my blue-eyed Irish lady friend.  She got into the public bath and hot springs butt naked.

And even got her back scrubbed by Masako, a survivor of an atomic blast.

From a Japanese hot spring, I have learned that spreading peace for the world starts as a power that emanates from within one person.