The most wicked risk of a mother’s love for a child is loss, and the price of loss is grief…  But the sheer passion of grief can become indescribable if a mother ponders on her decisions.

In Part I, we left when my father returned to Seattle to stay while leaving behind in Hiroshima his two youngest siblings and his parents.  This was 1937.  Before leaving, the family took this portrait with Grandmother Kono sitting on the sakura wood at the house.  Suetaro is standing next to her:

My father says that their younger sister Mieko was ill often.  Indeed, she passed away in 1939 at just 15 years of age from an apparent kidney infection.  Since my father was already in Seattle by that time, only his youngest brother Suetaro was left along with my grandparents.  Most decisively, Grandmother decided Suetaro was not to return to Seattle when he turned 18.  In “Masako and Spam Musubi,” she was very concerned over the harassment and intimidation she had received due to the threat of war against Japan.  I also “feel” that Grandmother knew Grandfather was ill by the time she made the decision.

Sure enough, the very next year (1940), Grandfather Hisakichi passed away from stomach cancer.  He was 59 years old.  After raising Mieko for 15 years and marrying Hisakichi 31 years earlier in Seattle as a picture bride, only she and Suetaro were left in their home.  War with America would start the following year.  A war in which her three oldest surviving children called America home. 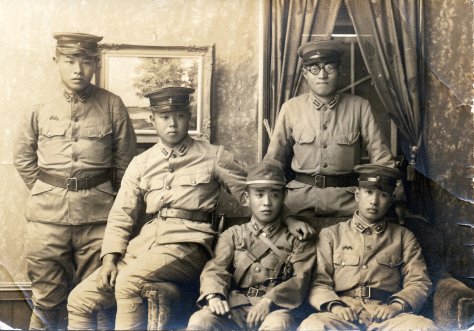 According to the handwritten date on the back, this photo of Suetaro below (on right manning a non-combat grade light machine gun made for training) was taken on May 10, 1939 at the “Hara Mura Training Grounds”:
Here is Suetaro, perhaps in a posed photograph for PR purposes.  It is of professional quality and taken on the same day as above:

I have a strong belief this was taken at the Fukuyama training grounds for his regiment, the 41st Infantry Regiment (unverified):

Another piece of his elusive history then emerged – but it was not from the 100 year old woodshed.

However, this is not a story on Suetaro’s life but about his life with his mother.  In “Masako and Spam Musubi”, we know she had her second stroke after being informed by the remnants of the Japanese military of her beloved Suetaro’s death.  The last Kanemoto in the family home was now… herself.

During my trip to the family home in September, my cousin Masako, her younger brother Kiyoshi, her son Toshiro along with my son were looking at vintage photos Toshiro uncovered just a couple weeks prior in the shed.  A number were of Suetaro with my father and Grandmother.  We were all quite emotional by then.  Masako removed herself from the table; I assumed she was overcome.  I didn’t stop her from quietly leaving thinking that.

Instead, she came back a few minutes later with something in her hand.  It was a small notebook.  Aged and frayed at the bindings.  Her eyes were red.

It was Suetaro’s war diary.  We were simply stunned.  Masako had it secreted away.  For decades.  She chose to bring it out now.  For closure.  It was the right time.

It took us a few moments to realize what she had brought.  It was brittle and smelled of old books.  The paperstock was of low quality – more like newspaper stock – as paper was in very limited supply during the war years.  We handled it as gently as possible.

The first few pages were of what he did during a short period of time; Suetaro’s writing was neat and in black ink.

Then the handwriting changed.  Suddenly.  It was hurried.  Rushed.  And in pencil.

It was his farewell letter to his mother.  My dad’s mother.  My grandmother.  It was dated March 3, 1944.
Kiyoshi tried to read it; it was difficult as it not only was in his hurried cursive but in pre-MacArthur Japanese.  Many characters are simply not used any more.  Unused since 1945.  Only a few people can read it – like my father.  Suetaro’s brother.  But we managed to read critical passages.  I will include two pages as reference.  However, these are very literal translations of a few sentences but needs be read in its entire context considering the environment was when he wrote this.  It is easy to misunderstand or misconstrue his heart and soul at that moment.

I stress this abbreviated presentation can be misunderstood.  My interpretation is, “I willingly go to war for Japan as we are on the brink of winning or losing.  By winning, Japan will free my older brothers from the concentration camps in the US.”

He will fight – and die – so that Japan will win.  If Japan wins, they would take over the United States and by doing so, free my Dad and his older brother Yutaka from the concentration camp.  At the time of his writing, both were imprisoned at the camp in Minidoka, Idaho after being relocated from Tule Lake, CA.  (His nephew, Bobby, had already perished in Minidoka at the young age of six.)  His older sister, my Aunt Shiz who passed away last month, was imprisoned at Manzanar.

Man, my eyes welled up.  Everybody was in shock…even Masako once again.

I am unable to comprehend how my Grandmother must have felt reading that letter in 1944.  Suetaro had secreted it away in the “butsudan”, or family altar.  She had decided Suetaro was not to return to Seattle to join his elder siblings.  Now, having read this letter, her regret must have been immense.  Grief.  She lost a piece of herself.  A beloved piece.

Mieko had passed away.  So did her husband in 1940.  Now her youngest son writes he does not expect to return.

Could she have foreseen this fate while she happily stood in front of her Seattle barbershop near King St. and Maynard in Seattle in the 1910’s?  I doubt it.

She would be alone.  To ponder.  To possibly regret to her last day.