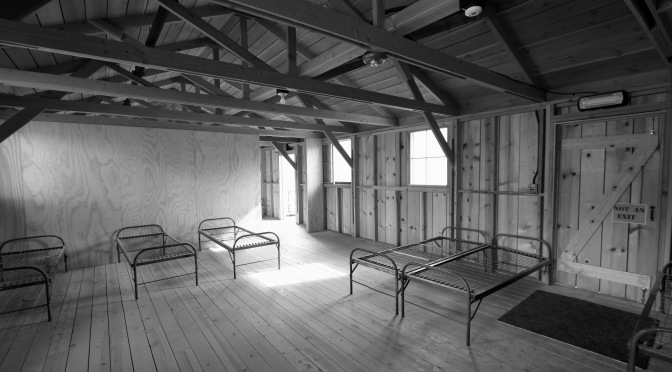 It wasn’t the deadly black sand that greeted the US Marines on Iwo Jima.

But as we stood on out on the desert, white powdery dust would swirl up in the softly blowing arid wind…  and I then realized it was upon this gawd-awful sand that my Aunt Shiz and Uncle John built their future for their family.

It was their Iwo Jima…  It was called the “Manzanar War Relocation Center” by our government back during World War II.

They were forced onto these forsaken sands by FDR in April of 1942 but made the most of it.  Quietly.  仕方が無い…  我慢.  Shikataganai and gaman. 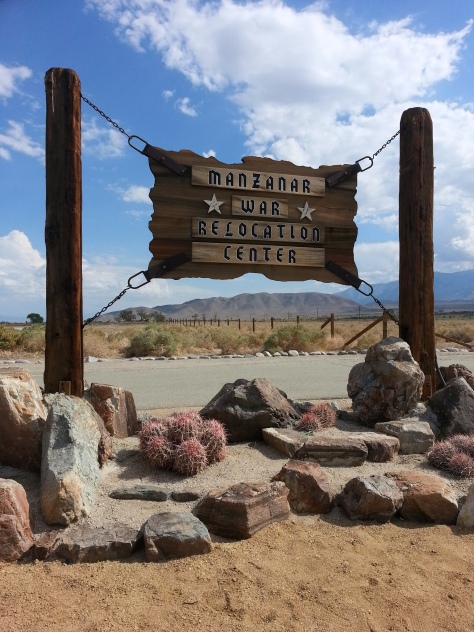 It’s just my opinion but political correctness be damned.

It was a prison.  Complete with eight guard towers and soldiers manning .30 caliber Browning machine guns.  Barbed wire fencing all around.  No freedoms.  Chow at specific times.  Public toilets and showers.  No running water in your “cell”.  No cars.  No soda jerks.  You were classified as “Enemy Alien” even though you said your Pledge of Allegiance or were a Boy Scout.

There were ten well known ones like Manzanar.  But quite a number of smaller or special purpose prisons were scattered about the US – some of which have been long forgotten.  But one thing in common was they held Americans incarcerated just because they looked Japanese.  Not one was ever convicted of spying for Japan.

I had never been to Manzanar.  However, since Aunt Shiz passed away at the age of 95 last year at this time, I heard a call to visit.  So my friend and I decided to make the 500 mile+ round trip the Friday before Labor Day weekend.  It was time to go.

Manzanar back in 1942 was an isolated, desolate desert wilderness.  Hell, it still is for the most part.  The 2010 Census only reported about 2,000 residents; imagine how uninhabited it may have been seventy years ago.  Temperatures soar to over 110F in the summer and plummet to the 20’s in the winter.  It was exactly 100F and humid when we arrived that Friday.  It lies between Lone Pine and Independence on US 395.

If you haven’t heard of these prison camps during WWII, FDR signed Executive Order 9066 (There’s those danged Executive Orders again!) ordering Japanese (Issei) and Japanese-Americans (Nisei) to evacuate from the West Coast of the United States.  The FBI and the US Army were there to ensure they left.  These families could only take what they could carry with many everyday items prohibited.  Knives, guns, tools…and cameras because they were looked upon as the enemy.

Here are some official US Government photos (except for my color one) from that period; please note many of these were taken by the Government and were meant to appease the public:

As general information, a relative said the latrines were so cramped that you almost touched each other while sitting on the toilet and that there weren’t any stalls.  Just holes when the first arrivees showed up or after toilets were finally installed a little later.  It was hot and stuffy inside with the stench and flies unbearable.  They had to wait in line to use the latrines, take a shower or eat.

During the war, Manzanar internee Pfc Sadao Munemori – through his brave actions on the battlefield – was bestowed the Congressional Medal of Honor…posthumously.  (Twenty-one Japanese-American soldiers were bestowed the Medal of Honor.)

Interestingly, two-thirds of the Japanese Americans interned at Manzanar were under the age of 18 per the National Park Service.   There were 541 babies born at Manzanar; my cousin Roy was one of them.  (Another cousin, Neil, was born in Tule Lake, CA while his older brother Bobby perished at another camp at six years of age.)

It is still difficult to believe all of my stateside relatives of that time – all American citizens – were subjected to the degrading treatment depicted above.  But I think my Aunt Shiz had the toughest experience raising four children – with one born in camp.

As we walked through the museum, I perspired profusely even though it had a cooling system.  While my friend was intently reading a number of exhibits, I tried to occupy my mind with other thoughts; I still didn’t know how I would react to being here.

Then, I saw several faces in photographs lining a hallway honoring Toyo Miyatake.  I had often seen them in my youth walking about Little Tokyo or at the temple (I am Buddhist.).  The familiar faces somehow made me “feel at home” or secure in a way.

Here are some other snapshots taken during the visit:

Lastly, a recreation of a tag each individual had clipped on his/her person to be incarcerated.  While the Nazis tatoo’d ID numbers INTO the flesh of Jews, this tag served essentially the same purpose.  This one reflects Toyo Miyatake:

We walked on the same sand that Aunt Shiz, Uncle John, Hiroshi, Bessie, Shozo and Roy walked on for 3-1/2 years.  We experienced the heat, although it was but 100F when we arrived there and partly cloudy.  The dust that got kicked up by the warm gusts did swirl around a bit as Aunt Shiz described.  My Subaru Outback was coated with that fine dust.  It was almost like the powder law enforcement uses to bring out latent fingerprints.  And perhaps it is TMI, but I did step inside a modern “port-a-potty” set up out in the desert.  Believe me…  it was hot and stuffy in there.  That will suffice.  But I think that they all endured that for all those years…  Unbelievable.

As we drove home, my friend asked me how I felt.  I had mentioned to her I might shed a tear or two (from the dust, of course, as real men don’t cry) before we went.  After pondering her question, I answered, “Elated.”

Bizarre answer?  Perhaps.  But I was elated I got to slightly experience what they all did 70 years ago.  No, I did not have to sleep on straw mattresses in stifling cramped rooms nor eat prison-grade quality food at the beginning of incarceration.  Nor line up for chow or to take a shower… Nor have to fear .30 caliber Browning machine guns pointed at me…

But I did finally see that my aunt and uncle built their future upon what they had lost – and what they learned to be important for family – on these white sands of Manzanar.

76 thoughts on “Sands of Manzanar”