My little cake boss is now 17 years old but has had a devil of a time the past four months.

But since she moved in with me full time after school started in September last year, we had talked about getting another family member.

It was not easy finding a Corgi pup – especially a “rescue”. There just weren’t any. Who would turn in an adorable Corgi pup anyways? So the search widened to a good kennel; indeed, there are quite a few scam sites preying on lonely people looking for four legged companionship as well. She had come across an “available” puppy but her instincts told her to ask her old man (me!) for advice. Indeed, it was a scammer.¹

Worse than scammers are the puppy mills.

But no pups were to be found within 500 miles of us – not a single one… but we finally came across a nice, family run kennel in Iowa. It was then I found out puppies can be shipped. I still don’t like the idea but there was no other choice.

…So the deal was struck.

His cold journey began at 8:30 am in Iowa on January 23, 2020. He was checked onto a Delta flight out of Des Moines which landed a couple of hours later at the Atlanta hub after a noon takeoff.

However, the flight tracker shows a number of altitude changes on the long leg to LAX – which to me means the flight crew was trying to escape chop. Imagine being a pup – it doesn’t even know what this large, cold machine is let along being artificially off the ground and being tossed around by chop.

The Arrival at Delta Cargo

My oldest daughter who lives miles away kindly offered to pick my Little Cake Boss and me up in Long Beach, CA. We got there just as Brooke’s new boy was deplaned and taken to Delta Cargo’s LAX facility.

It was like driving to the hospital for the birth of a first child. 🙂

The Delta team brought him up to the counter very quickly! But we could tell the poor thing was scared out of his wits from the flight.

He was quite damp and shied away from us humans.  Of course, after spending his first four months of life on an isolated farmland and kennel in Iowa, the constant rambling of noisy big rigs and trucks just ten yards behind us didn’t help much, I’m sure.

My oldest daughter Robyn was a big help too, being the consummate dog lover since getting her first Golden Retriever at five years of age.  Her soothing “doggie voice” helped soothe the poor thing… plus the portable dog carrier wouldn’t have fit into my Ford Mustang’s trunk.

Adjusting and a Surprise

Brooke wrapped Jasper in my old airline blankets and held him all the way home.  He was still so scared – or so we thought.

After we first walked into our home, he tried to hide in dark spaces or corners.  “What’s wrong, Jasper?” she would ask in dog speak – but he wouldn’t answer.  He also wouldn’t eat much or drink.

Well, a couple of days later, Brooke looked at the papers from the kennel.  As it turns out, Jasper was given a rabies vaccination right before being put on the flight.  I recalled our other small dog; she hid under the bed for two days after getting one… So I figure his suppressed mood was from a one-two punch: the bumpy flight and the ill effects of the rabies shot.

Happily, its been five days since Brooke’s new boy joined our family… and he is doing super! His other ear is now beginning to stand up, He’s eating, drinking and follows his new mama wherever she goes.  He sleeps right next to her; I’m sure it is very comforting.  Jasper even sits on my lap!

But most of all, I miss my oldest daughter’s Corgi, “Yogi”…

May he be at peace. 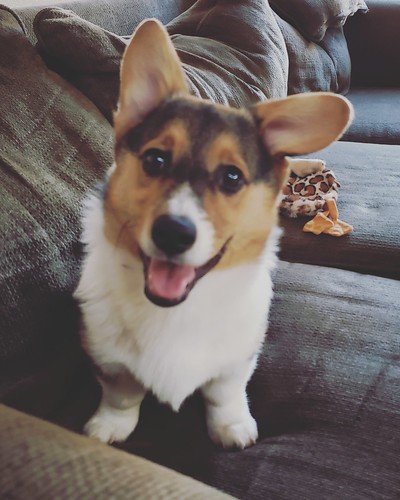 This is kid was phenomenal! Performed at his graduation, he imitates President Trump, President Obama, Cruz, Bernie and Hillary. (ps I cannot figure out how to show a screen preview. It is just a link.)

After the British Expeditionary Force had been evacuated from Dunkirk in 1940 [1], then Prime Minister Winston Churchill ordered the creation of a force capable of carrying out raids against German occupied Europe.  Churchill envisioned a “ … specially trained troops of the hunter class, who can develop a reign of terror down these coasts, first of all on the ‘butcher and bolt’ policy (hit and run).”  What transpired from Churchill’s order was the formation of the British Commando, an idea inspired by Lieutenant Colonel Dudley Clarke, whose suggestion was forwarded to General Sir John Dill, then serving as the Chief of the Imperial General Staff.  General Dill, who was aware of Churchill’s directive, approved Clarke’s proposal.

The Commandos were assigned to the operational control of the Combined Operations Headquarters with overall command assigned to Admiral Sir Roger Keyes, who was a veteran of the Gallipoli Campaign…

Just thought the videos were interesting… 🙂

This subject is still a topic of debate, even to this day.   Please watch these 2 videos before giving me your opinion.  Thank You.

No one warned me that when you read this book – you must be prepared to join the family.

Reading Leora’s Letters, you do not merely become acquainted with this close-knit, hard-working family – you become one of them.  In this tumultuous period of our history, you are transported into the  heartland’s home front and the different areas of combat of that age.  You can understand their dreams and hopes; feel their anguish, trepidation and heartaches and you pull for each member of that family to succeed just as you do for your own loved ones.

One need not be a WWII buff or knowledgeable of military operations to comprehend the Wilson brothers’ correspondences. …

A most excellent report on Okinawa’s history and the battle to gain control of it in 1945.

Today, Okinawa is the southern-most prefecture of Japan and accounts for two-thirds of the Ryukyu Island Chain that extends for a thousand miles from Kyushu to Taiwan.  It has a long and interesting history extending back to the Stone Age period.  It was once a kingdom in its own right and, because of its location, became an important trade center.  The kingdom entered into the Imperial Chinese tributary system during the Ming Dynasty beginning in the fifteenth century.

In 1609, Japanese warlords from present-day Kagoshima invaded the Ryukyu kingdom and forced the Okinawan king to accept the terms of the Tokugawa Shogun to become a vassal state, while at the same time maintaining is relationship with China as a tributary state.  Despite these two powerful controlling factors, the Okinawan kingdom retained a considerable degree of domestic political freedom for over two hundred years.