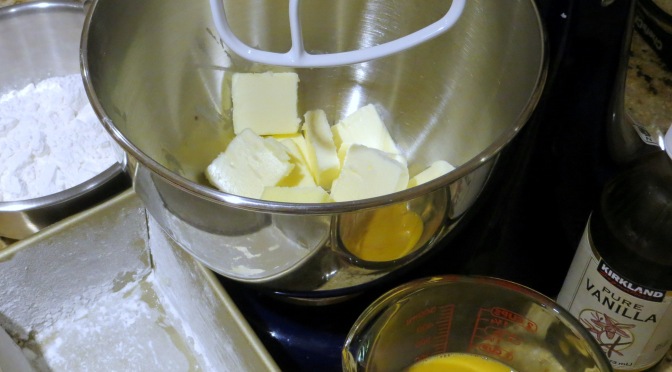 So my little Cake Boss wanted to bake something with me…but what?

The funny thing was she told me the only dessert she really liked from my repertoire was the Strawberry and Almond Frangipane Tart.

So we decided on Classic Pound Cake…sans the lemon glaze.  She didn’t want it.

Per the Cook’s Illustrated recipe I decided upon, the secret apparently lies in the temperature of the butter and eggs as well as using cake flour.  Do I dare say it sounded easy..?

I forgot I worked for the household Cake Boss.  Silly me.

Well, she plowed through it… at a eleven year old’s pace, that is.

The ingredients used were:

We followed the Cook’s Illustrated bible as best we could… And you know what? It domed wonderfully!

After it cooled and nearing midnight, we got to sample her creation.

Oink oink! It was really good!

So now, I have another addition to my man-kitchen dessert repertoire… and the little Cake Boss didn’t fire me. She nearly did after I put together her Classic White Double-Layer birthday cake. She had demanded I even off the domed tops…which I did not… and I should have listened to the very experienced little Cake Boss. 😦

But I survived to bake another day.