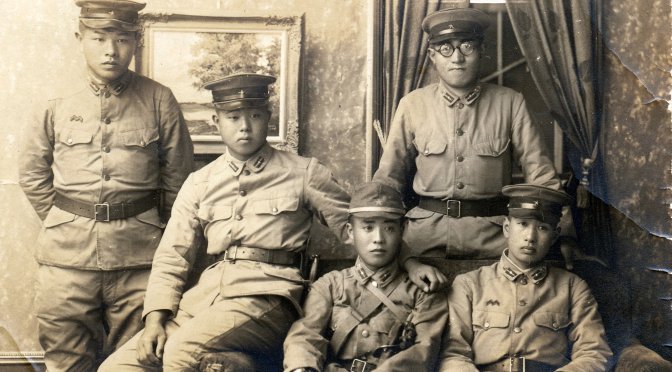 It is believed I occupy a potentially unique position when it comes to looking at history as it pertains to the Pacific Theater in World War II.  I am American first and foremost and have studied WWII history out of curiosity.  As expressed in the description of my blog, my viewpoint is from “one war, two countries, one family”.  However, one potential uniqueness is that I am able to read a bit of Japanese; you may be amazed to read what is written about WWII from the Japanese viewpoint of history. As such, I believe each battle will have in the background two broad, driving and dissimilar viewpoints: one from America and one from Japan.  The attack on Pearl Harbor is one example. But that is but the surface on war’s history – a high altitude view.  One that can be easily manipulated politically. But being on the ground dealing in face to face combat – or interrogation – leaves little to interpretation.  However, the fog of time challenges what is seen in a veteran’s mind.

Many of us here in the US interested in this world-wide cataclysm believe the Japanese soldier was a fanatic… freely willing to give his life for the Emperor.  The banzai charges.  The kamikaze attacks.  Individual soldiers throwing themselves under tanks with an explosive charge strapped onto their backs in a suicide attack. The truth of the matter is… they were farm boys.  City boys.  Just like our boys, they were drafted.  Instead of dying in “banzai attacks”, these “fanatical” Japanese soldiers wanted to go home just like our boys…but they couldn’t for fear of reprisal against their families.  Being a buck private in the Japanese army was brutal.  Perhaps not as brutal as the treatment they gave POWs but brutal nonetheless.  My Uncle warned his brother-in-law of that brutality in his farewell letter written on May 3, 1944.

Indeed, as early as 1943, morale amongst the Japanese soldiers was very poor per this US Army G-2 intelligence report:

So perhaps things are not what they seem? I wonder how my Uncle Suetaro felt.

The 41st Regiment, and therefore Uncle Suetaro, was stationed in Pyongyang, Korea in May, 1944 per Mr. Ota’s book.  It had become absorbed by the Imperial Japanese Army’s 30th Division. After sunset on May 8, 1944, the 41st Regiment boarded a steam locomotive bound for Pusan.  After one day’s ride, they arrived in Pusan on May 9 at 4:00 PM. All 5,000 troops soon began to cram onto a ship called the 日昌丸 (Nissho Maru) with a capacity of 3,000 troops…  in addition to supplies and their backpacks.  American intelligence reports indicate temperatures could rise to 120F within the holds.

Per Mr. Ota’s reconstruction, the Nissho Maru departed Pusan on May 10 as part of a Imperial Japanese Navy fleet convoy. At about 3 PM the next day, the convoy docked in Moji Port in Kyushu, Japan to take on more supplies and hook up with other transports.  During this time, their destination was disclosed: Mindanao.  I am sure thoughts of seeing his mother was enveloping his mind…and heart.

Hiroshima was not far away. In the early dawn hours of May 13, the convoy – now consisting of eleven transports and four destroyer escorts, departed Moji Port.  They were vigilant against US submarines and proceeded at best possible speed.  They docked at Manila during the evening of the 18th.  The troops were already plagued with severe cases of sweat rash.

Soon, the 1st and 2nd Battalions on board the Nissho Maru headed to Cagayan with the 3rd Battalion and headquarters staff headed to Surigao on board the Tamatsu Maru.  Because they were splitting up and therefore would be separated from their regimental colors, the commanding officers boarded the Nissho Maru on the 19th as a send off.  They reached their destinations on the 23rd.  Soon, they were engaging Filipino guerrillas and they were extracting their toll on Uncle Suetaro’s regiment.  Per Mr. Ota, Captain Okamoto, a combat veteran from New Guinea was killed.  On July 10, Captain Ozaki, commanding officer of the 2nd Batallion, was also killed.  Short on officers, Captain Masaoka was appointed commanding officer of the remaining troops, numbering about 1,000.

By the time of the invasion, General Yamashita had more than 400,000 soldiers stationed about the Philippines.  My Uncle Suetaro’s division, the 30th Division, was stationed on Mindanao to the south.  Yamashita had access to close to 900 planes, about 100 airfields (the largest of which was Tacloban on Leyte), and a naval fleet spearheaded by four carriers and seven battleships.  (However, this paled in comparison to the naval and air forces of the US. For instance, by the time of the Battle of Leyte Gulf, the US had 34 carriers at their disposal.) The invasion of Leyte was preceded by the US 6th Ranger Battalion taking three smaller islands to the east of Leyte Gulf on October 17, 1944. The weather was perfect and all hell broke lose on October 20, 1944 (A-Day) when MacArthur unleashed the Sixth Army’s X Corps, XXIV Corps and the 21st Infantry Regiment in three different assaults on three eastward facing beaches (see below):

General Yamashita was caught flat-footed.  He had anticipated MacArthur would invade Luzon first.  He had to scramble.  In fact, the invasion’s advance was so rapid that MacArthur made his walk onto the Leyte beach a “Hollywood-esque” event on the first day.  Yes, he actually had several takes done of wading ashore being the media seeker he was but it is true there was gunfire off in the distance. Fortunately for our troops, the Japanese had withdrawn her troops from shoreline defensive posts.  Even though there had been up to four hours of bombardment by the USN of the shore defenses, many fortifications – including pillboxes – were untouched per an A-Day communication to General Hap Arnold of the USAAF from General Kenney.  He concluded there would have been a blood bath similar to Tarawa if the Japanese hadn’t withdrawn.

The first major coordinated Japanese Army troop movements (i.e., reinforcements) to Leyte involved troop transports, joined by units of Cruiser Division 16 out of Manila.  The objective was to transport about 2,550 soldiers (count per Mr. Ota) of the 41st Regiment from Cagayan, on Mindanao, to Ormoc.  Named Convoy TA 1 by the USN, it included heavy cruiser Aoba, light cruiser Kinu, Uranami, three new T.1-class transports (T.6, T.9, and T.10), and two new T.101-class transports, (T.101 and T.102). They were to be led by Rear Admiral Sakonju Naomasa in the Aoba but she had been torpedoed two days earlier by the USS Bream.  The flag had been transferred to Kinu. This convoy picked up the surviving 1st and 2nd Battalion members of the 30th Division at Cagayan, Mindanao on October 25th and arrived at Ormoc.  Fortunately, the Division had been alerted the day before so they were ready.  Uncle Suetaro had apparently been in the the 3rd Echelon, 1st wave of five transports that disembarked on the 26th in Ormoc.

Per Mr. Ota and under the command of Lt. General Shiro Makino, Uncle Suetaro’s 41st Regiment headed towards Tacloban.  He could not have foreseen what was ahead of him: swamps, jungle, mud, illness, starvation…and the US Sixth Army. …and most poignantly, up against my dad’s US 8th Army’s Nisei’s in the Military Intelligence Service. To be continued in Part 3. (Note: The Battle of Leyte Gulf took place from October 23 to 26, 1944.  The immense Japanese battleship Yamato was reportedly only a few hours from Ormoc Bay when she inexplicably turned back during this epic sea battle.)