Experiencing this heat and humidity was one of my personal goals for this pilgrimage.  No history book on the Battle for Leyte could ever truly convey the endurance each soldier – American or Japanese – put up in order to stay alive given the climate, kill the enemy and go back home.

It was all out war… A war that fumbling politicians caused or created with their own personal agendas .  Even though failing, Roosevelt, Tojo, Hitler and Churchill didn’t have to go to Leyte to potentially lose their own lives.  They sent young, vibrant boys and men in their stead to fight and die in this climate unsuited for violent life and death struggles.

Millions of other people died, too.

(Note: by clicking on most of the images, you can see the location on a map.)

Although early in the morning, the sun was already unforgiving.  In reacting to the humidity, your body begins to perspire just standing there in the open-air lobby.  Once you step out of the shade, rays come down on you so searingly that you wouldn’t need a microwave to zap popcorn.  Just leave the Orville Redenbacher bag out on the sidewalk for a few minutes.  I’m not kidding – and I live in LA.

I thought I was a whiz kid by bringing along one of those microfiber drying cloths you use when wiping off your car after washing it.  You know it can soak up Lake Michigan and not drip one drop.  Well, it was useless in this heat.  It also wasn’t anti-odor. 🙂

As we awaited our vans, I also noticed the ladies were all wearing long sleeve over-shirts.  In this heat?  Odd.  So I asked my cousin Masako why she put on additional shirts given it was so hot.

She said that it was because they didn’t want to get dark.

Our first official stop was MacArthur Landing Memorial Park; it is in Palo and was codenamed “Red Beach” for the invasion of Leyte on October 20, 1944.  This is where MacArthur waded ashore then broadcast his speech to the Filipinos of, “I have returned.”

To his credit, though, there still was small arms fire around the area.

Proof of at least one other wading attempt by MacArthur:

Notice Philippines President Osmena (in the jungle hat) is to the left of MacArthur in the above image; yet, in the memorial, he is on MacArthur’s right.

Our next stop was “Hill 522 (see notes)”.¹  Essentially, this high ground was critical to saving US lives as it commanded a sweeping view of the landing beaches and ground inland.  It was called Hill 522 as it was 522′ high.

Leyte’s temperatures do not vary extensively during the year; on this day, my cell phone said it was 89F.   If it were this hot on October 20, 1944, the US soldiers and Filipino guerrillas faced a daunting task slogging up that hill with full packs, weapons and ammunition…  Never mind they were being shot at.  The same for the Japanese soldiers scrambling up to reinforce their positions.

We walked past a little village girl; the journey up the hill begins:

Just half a year earlier, Masako had tremendous difficulty just walking… but after visiting the shrine, she felt that Uncle Suetaro was calling her to visit him on Leyte and began to strengthen her legs with exercise.  This would be her first true test.

It leveled off for about 30 yards before climbing once again.  We passed some homes:

Distinctive odors signaled the absence of an established sewage system.  I now had a first hand idea of what Old Man Jack always said about the islands he fought on during WWII.

After some more climbing, we came to a clearing.  With my t-shirt soaking up the world’s supply of Sparkletts water, I thought, “Dang, that wasn’t a tough climb at all!”  Wrong.

It was a rest stop.  Duh.  My guess is that it was about 200′ up the hill.  The crest of Hill 522 was straight ahead in the picture above but you still can’t see it.  And Masako was still hanging in there.  What a driven lady she was.

Well, she and her sister Tomiko made it to about the 300′ mark before they had to retire.  What an effort, especially with her bad legs, the heat and humidity.

This is where I ran into four village children who were trailing us part of the way up the hill:

As for me and the hop, skip and a jump to the top?  Well, this southern Californian began to fall behind, slowly but surely.  I blame it on the 100 pounds of camera equipment and the eight gallons of water I was lugging in my backpack…not.

I petered out at around the 400′ mark (Just trying to make me look good.) as the heat and humidity got to me.  So I’m a wuss.  To tell you the truth, I got a bit dizzy.  In that heat, I did think of the soldiers fighting for their lives on his hill 71 years ago.  Do we even know their names?

Well, my older cousins Namie and Kiyoshi – along with the rest of the group – made it to the top where a large cross has been erected.  Incredible, yes?  And Namie survived the atomic bombing.  They said it afforded a commanding view of the surroundings, a testament to the combat need to take this hill.

After a much needed lunch and rest stop, our next destination was Hill 120². Hill 120 is still a sacred place to the Filipinos; it was here that the US flag was first hoisted above Leyte by US Army Lt. Clifford Mills.

As with many other places on Leyte, this hill was severely pummeled by the 200 mph+ winds of Typhoon Yolanda, felling several trees and ripped apart the memorial.  Given that, I was amazed at the growth that had sprung up since then.  (I also understand that before the typhoon, this memorial was in excellent shape with the landscape being pruned and structures maintained.  Leyte is still in process of bringing this site to its previous state.)

While “only” 120′ high, Masako again took on the challenge.  Because of the damage from the typhoon, some of the footing was precarious but she ambled up.  A lot of the footing was not clearly visible due to the growth.  It swallowed up your feet and legs. 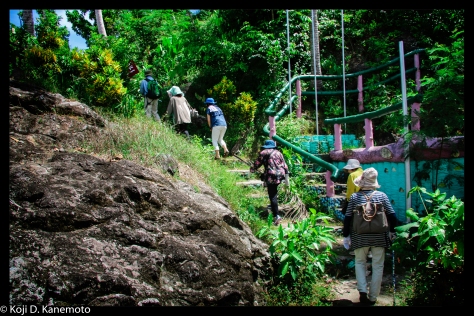 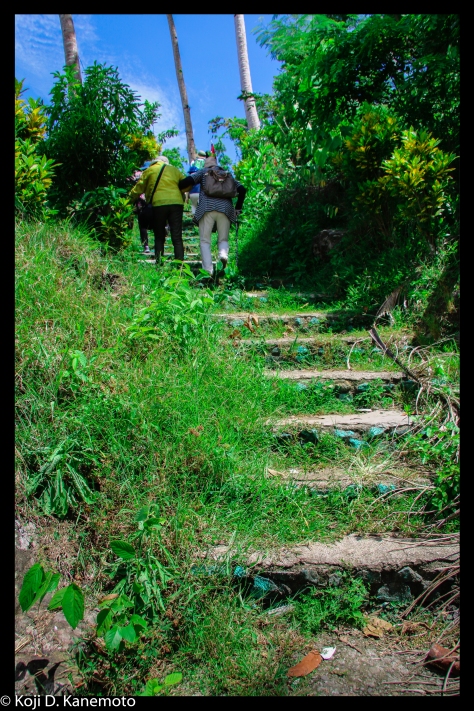 Given this vegetation is what has grown back since the typhoon, it still amazed me with its height and thickness. Grasses were chest high in some spots; walking through the vegetation left tiny thistle-like things stuck in your shoes and socks. You definitely felt the coarseness rub on your legs as you made your way through.  It was impossible to walk through it silently.  If you were a soldier, the rustling must have sounded like a fog horn.

There is one stump (below) that I could see remaining from the actual battle on October 20, 1944, pot-marked with bullet holes; my cousin Kiyoshi is walking past it:

After descending back down, we walked around to the side of the hill; it was dotted with a number of privately erected memorials.  One was for the US soldiers; it was flanked by unexploded bomb casings.

Several others were for Japanese soldiers, all privately erected.  This is when Masako truly began to feel the relevance of why she just had to come. 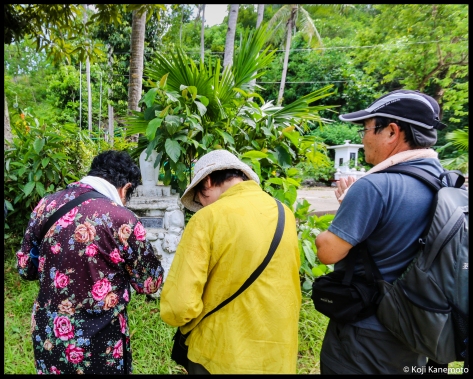 My five cousins. Masako, Tomiko and Namie on the left survived the atomic bombing. Izumi is Masako’s filial daughter with Kiyoshi next to her. Kiyoshi was born immediately after war’s end; the moment came in the Kanemoto home quite suddenly.

At Hill 120 and while looking at the number of memorials, Masako said to me, “All these memorials…  It is terrible knowing they lost their lives and have since been forgotten.”

…and this is a feeling you will never find in a textbook.

You had to be there.

Day 3 to follow…  Masako and I read our letters to Uncle Suetaro and pacificparatrooper’s father Smitty at the actual battle sites on Leyte.  Short videos will be included for those interested.