“Older men declare war. But it is youth that must fight and die.”

As we left the Mainit River bridge and our first memorial service behind, a deep somber prevailed.  We had been walking over a solemn graveyard, one without gravestones or markers.  There was no honored archway signaling you are entering a resting place for brave soldiers who were once farm boys, clerks or musicians before clashing with the ghastly violence caused by failed leaders.  Indeed, this graveyard had no boundary but it was timeless.

All these young men – American or Japanese – were forced to fight one another.  Perhaps many fought those in front of them out of bred hatred but I believe all fought for what was behind them: their respective countries and families… some who would never know of their names let alone died.

I was one of them until five years ago.

A bugler played taps in my heart.

We were their funeral procession.

With the first somber memorial service experience behind us, we headed back to the parked vans.  As we approached the dwelling, we handed the food and cigarettes to the awaiting families.

The drivers were kind enough to have started the engines back up and had turned the air conditioning going.  Being a southern California boy, I had wilted in the heat and humidity.  Even the Wicked Witch of the West would have melted from all the perspiration that had soaked my t-shirt.  Heck, Dorothy would have been spared.

We headed north up towards Carigara Bay but a short distance later, we stopped in front of an elementary school in Tunga.

It turns out, the 41st Regiment had set up a field CP here.  And Uncle Suetaro did double-time it past this location on his southward march to Jaro from Carigara to engage the US Army.

Its principal came out to greet us and say hi.  She was a cheerful lady although having survived the typhoon.  She indicated the school had been literally blown away.  Fortunately, a Taiwan church foundation supplied the funds to rebuild most of it.

Before reaching the vast playground, we came across this.

We got back into our two white Toyota vans; their black limo tint was a necessity but it made for hard picture taking, especially from a moving van.

Soon, we came upon Carigara Bay; its blueness quickly greeted us as we drove in and out of sunlight due to some cloud cover that was developing.  It was a signal as you will read later.

We veered off the main road at some point and into a village of rice farmers.  Living conditions were very basic, down to the dirt and gravel road.

We stopped in front of a dwelling; in my imperfect Japanese, I understood a village elder lived there and that Mr. Ota knew him.  It was then I found out it was the site of our second memorial service…and my time up to the podium.

We were at Hill 517, part of the savage Breakneck Ridge battle.

As we prepared for the ceremony, some dark clouds had reappeared beyond Breakneck Ridge in our background allowing the hot sun to play hide and seek.  Yet in comparison to 71 years ago, the scene was entirely absent of death and violence – combat that took many lives over two weeks.

As earlier that morning, our group began to set up the memorial table as before, adorned with photographs, food, incense and osake: 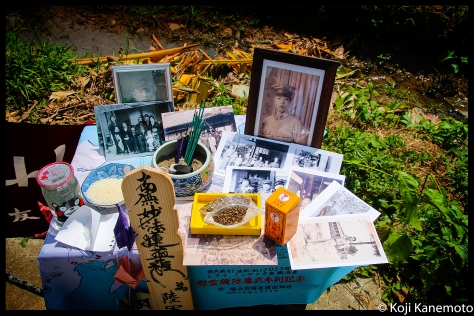 At the right front, next to the photographs of my Uncle Suetaro are pictures of “Smitty”, the father of blogger gpcox of PacificParatrooper on WordPress.  An established blogger, gpcox and I have a special kinship that began soon after I began to blog myself as her father – a member of the famed 11th Airborne – arrived on Leyte just a couple weeks after my Uncle Suetaro did.  While he first fought his counterpart Japanese paratroopers at Burauen – and while the chances are remote that he and my Uncle faced each other in battle – they were not far from each other on this small island in the sweltering Southwest Pacific had my Uncle survived Jaro. 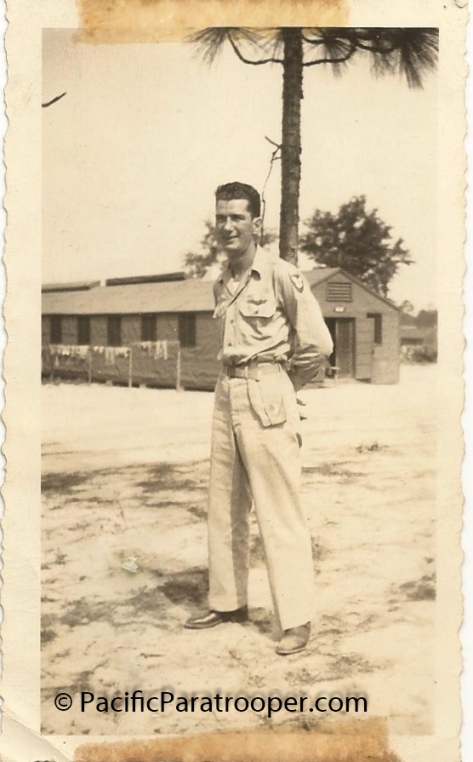 She was gracious enough to write a letter to Smitty for me to read during the memorial service.  Yes, I had the honor to read two letters… both in each soldier’s memory, honor and peace.  I feel it unbelievable that gpcox and I are friends considering Smitty and my Uncle were fighting each other in a most bitter war.¹

A very warm but moist wind began to swirl about us as our second service began with Hill 517 in front of us but beyond the green rice seedlings.  The photographs of our fallen family seemed to do a joyful ballet in the breeze.  I think they were speaking to us.

Mr. Kagimoto once again led our chanting and did a marvelous job.

It became time for me to read my letters.  I was hoping to not insult any of my Japanese family and friends but I determined just to do what I believed to be proper.

I bowed to my group and said in my poor Japanese to please indulge me while I read two letters: one from Smitty’s daughter and one from myself to Uncle Suetaro.  I explained Smitty was a US paratrooper and that he had fought the same Imperial Japanese Army that Uncle was in on this now peaceful island.  However, after hostilities ended, he respected the Japanese and the Nisei and never said a negative word… that in fact, he had praise for my father’s US 8th Army unit comprised of Nisei’s.¹

Everyday, you feel anger, happiness, frustration… but they all paled compared to what was being conjured up inside me at that moment.

Reading each letter was tough; I didn’t take Puffs with me to the Philippines although I had considered it.  It took me five minutes to read the two short letters.  My voice trembled and cracked in between the constant sniffling – especially when gpcox wrote in her letter that she wished her father and the rest of the 11th Airborne would receive this letter and spend their next lives in eternal peace.

At the same time, I felt so peculiar reading the letters in English to my uncle, who wrote in his farewell letter to my grandmother that he would fight as a Japanese soldier to free my dad from the US prisons.  I think only Izumi understood part of what I said.

I did open it with a couple of sentences in Japanese, saying how blessed I was to have been able to receive a wonderfully smelling lunch on the plane, knowing he had so very little to eat… that I was embarrassed to have not known of him until 2010.  It was very hard to say to Suetaro that even up to last year my dad would ask me, “… and how is Sue-boh?”, as he fondly nicknamed him.  Each time, I would tell Dad you were still here on Leyte…and his face and especially his eyes would become very sad.  But Dad would then again ask me five minutes later, “How is Sue-boh?”

That was the toughest part of reading my letter to Uncle Suetaro.  Dad’s bond with him was so deep that his mind won’t accept that his favorite brother fought and died on Leyte to free them.

Soon after my reading was completed, the clouds that had collected over Hill 517 began to thunder…  Low but discernible rumbles.

But there is a deep meaning to that thunder for the Japanese as I was to find out.  As we concluded the ceremony, Izumi asked me in Japanese, “Koji-san, did you hear the thunder?” to which I replied yes.

“That means the heavens had heard you… and that Suetaro did, too.”

I believe her.  Both our eyes watered with happiness.

Other chapters are listed here for ease of locating earlier posts in this series:

1     Everett “Smitty” Smith survived the combat and was the first unit to go onto the Japanese homeland on August 30, 1945 for the Occupation of Japan.  I believe his unit actually jumped the gun a bit but he was there at the Atsugi Airbase when MacArthur and his corn cob pipe first landed as conquerer a few hours later.  I hope gpcox won’t mind but to show you Smitty’s character, an excerpt from one of her blogs:

“Upon returning home from Japan, my father and several other troopers from the 11th A/B, including two Nisei, went to a saloon to celebrate their return to San Francisco and the good ole U.S. of A. The drinks were put up on the bar, free of charge for returning veterans, and Smitty began to distribute them. He said he stopped laughing and talking just long enough to realize that he was two drinks shy of what he ordered. He knew right off what it was all about, but he tried to control that infamous temper of his, and said something to the effect of “Hey, I think you forgot a couple over here.” The reply came back in a growl, “We don’t serve their kind in here.” Dad said he was not sorry that lost control, he told me, “I began to rant things like, ‘don’t you know what they’ve been through?’ and ‘what the hell’s wrong with you?’”

By this time, the other troopers had heard Smitty yelling and it did not take them long to figure out the scenario between my father and the bartender. No explanation was necessary. In fact, dad said the entire situation blew apart like spontaneous combustion. The drinks hit the floor and all hell broke loose. When there was not much left in the bar to destroy, they quieted down and left the established (such as it was). The men finished their celebration elsewhere. Smitty said he never knew what, if anything ever came out of the incident. He never heard of charges being filed or men reprimanded. (I’ve wondered if Norman Kihuta, who was discharged on the same date as Smitty, was there on the scene.)

For the record, a barber wouldn’t cut my Dad’s hair either – even while wearing his sergeant’s uniform emblazoned with the patch of the US 8th Army.