(Please see An Atomic Spark and a 1937 Yearbook and Dad Was in the Newspaper for background information.)

There is living proof of forgiveness from a few – and they let out a resounding message of world peace for us.

It was an extreme emotional experience – not just for my oldest son Takeshi and I but for the kind souls who joyfully spent their afternoons with us on a hot September day in Hiroshima.  I was able to finally meet – and thank – the people who were kind enough to seek out my father’s 1937 high school yearbook and thereby give my father a joyous remembrance of his most happiest days of youth in the sunset of his long life.

Not being a writer, putting this experience into words is an endeavor.  But on September 6, 2012, we were able to meet in person Mr. Tsukamoto, Ms. Kanetou, Ms. Tanaka and Mr. Aramaki.

Any guided tour is exceptional.  A personally guided tour of a peace memorial and museum of a man-made event of unparalleled violence cannot be surpassed. Both gentlemen were severely burned as young children.  With all doctors killed in the city, they had to resort to mashed yam salve to soothe their wounds. (To see a VERY well written piece on their atomic experiences translated into English, please feel free to read it here.)  Imagine doing that yourself as a youngster.

They first pointed out where my father’s beloved high school, Nichuu, was situated in relation to the hypocenter.  It is one thing to see it on your monitor.  It is another thing to see it on a large wall map.  Overwhelming.  I knew it was close but it was not much further than one of my father’s triple jumps in Track and Field.  It ceased to exist – as did over 320 of their young classmates.

By destiny, both men – young children at that time being forced into laboring for Japan’s war effort – were saved by the decision of their instructor, Mr. Sekimoto.  Mr. Sekimoto decided it would be best for small group of them (which included another one of my relatives) to clear a large parade ground to the southeast (東練兵場) for the next crop of sweet potatoes.  The other classmates were sent to work on building a firebreak near Nichu – which sealed their fate.  They were erased from the face of this earth in a second.

Due to time, we journeyed outside with these two 81 year old gentlemen for further education.  However, without any inference of what was right or what was wrong 70 years ago, just a couple of images from within the Memorial Museum: 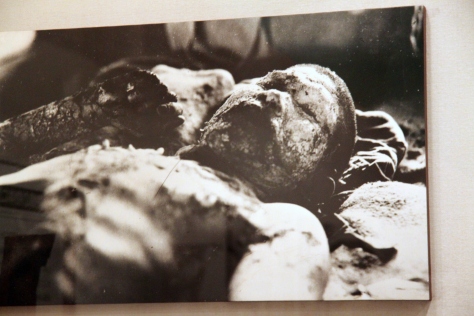 Messrs. Tsukamoto and Aratani guided us to the Nichuu High School Memorial, emblazoned with the 321 fellow students who perished.  As did Mr. Tsukamoto on August 6th, 2012, I offered water; my son Takeshi also without any urging whatsoever left his precious water bottle on that hot and humid day which is a glorious gesture.  There is a reason for the water as will be explained shortly.

We journeyed towards the cenotaph.  On the way through a park, Mr. Tsukamoto began to cry.  I asked him what was wrong.  He replied, “Your father is very fortunate to have family that think of his well-being.  My soul is now filled with joy.”  We hugged each other under the shade of a tree and cried together.  As it turns out, his father died at a young age; he was never able to thank his father for raising him through a most horrible period.

We arrived at the cenotaph; the inscription was designed and written by Mr. Tsubokawa’s and Aratani’s good friend, Prof. Saika Tadayoshi.  In English, it says, “For to repeat the fault we shall cease for we shall not repeat the evil.”  It was purposely written with no subject.  It is for the reader to decide.  Mr. Tsukamoto subsequently sent this image of the actual manuscript of Prof. Tadayoshi written in calligraphy (brush and carbon ink).

The Atomic Dome can be seen perfectly centered through the arch.  He explained the “eternal flame” is not truly meant to be eternal.  It is to be extinguished when all nuclear weapons are abolished.

Just beyond the cenotaph can be seen a pool of refreshing water.  The water symbolizes all the cries for water from the victims who survived the atomic blast.  Nearly all would perish.  Remember the water we poured on Nichu’s Memorial Stone?

We then walked to the actual hypocenter.  The atomic bomb exploded about 1,900 feet directly above.

There are several rivers flowing through Hiroshima.  We all know through books that the rivers were engorged with corpses and debris.  However, there are no photos in existence as it was when the city was destroyed.  There was no film let alone medical care.  However, before the US scientists came to measure radiation levels about two months later, a huge typhoon hit the devastated city.  While the rain tore through the rivers carrying the corpses out to sea, the rain also largely washed away radiation levels.  Therefore, when the US scientists did measure the radiation levels, it was tremendously lower than what it truly was.  You won’t find that written in any of our school history books.

We returned from the very enlightening tour to join Masako, Izumi, Ms. Kanetou and Ms. Tanaka.  My father was bestowed with many kind gifts one of which was a compilation of years past of Nichu – including images of when dad’s class was digging the pool at the school in the early 30’s.  But lastly, as a small token of peace, fellow blogger Seapunk2 sent me some artistic pieces representing peace and serenity.  One was presented Ms. Kanetou.  I explained it to her that the artist said a sense of peace may be coming “…directly from her actions. You may feel the spirit contained within them.  (I) sat so long and quietly, collecting those tiny pieces, sometimes with tweezers. It’s a beautiful experience, to listen to the shore birds, seals, waves and take in the Pacific while I gather the otherwise unnoticed gifts from the earth and sea. Then, once I got the idea for containing them, that, too, was peaceful and gave me a lovely sense of satisfaction…”

Lastly, in a photo discovery made just a few hours before meeting them, I came across a photo of dad taken in 1937 soon after he arrived back in Seattle after spending ten years in Hiroshima and graduating from Nichu.  He’s sporting his Nichu varsity sweater.  The attendees were overjoyed to see Dad’s pride in Nichu – even across the ocean.

The men were burned severely as children working in a field for their country’s victory.  While their country lost, it was but a moment in their lifetime.  They still attained victory for the world.

More to come on one family, two countries and World War II.