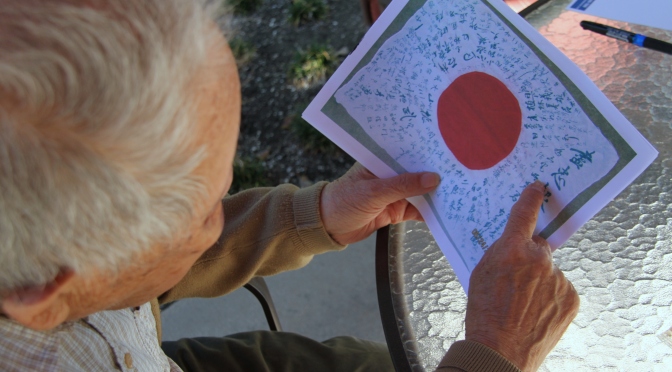 World War II Military Intelligence techniques are still important and in use today – but for entirely different reasons.

During the war in the Pacific, US military personnel were forbidden to keep notes or diaries in the event they were captured.  Nothing more disillusioning to be captured or killed, then have the enemy read about the ammo dump you just left from.  Especially for your buddies still stationed there.

On the other hand, Japanese soldiers were allowed to keep notes or diaries.  Apparently, the Japanese military saw the diaries similar to “water cooler gossip” at the office.

That was their downfall as Americans like my father translated such documents.  The Military Intelligence Service.  It was from these diaries that the Allies first began to see that the enemy were not the samurai of lore.

They had gripes of their commander – even by name.  They complained of starving, no ammunition, no water.  They also had uncensored letters from home – their families were starving, sick or had no home left for the soldier to come back to.

A mortar crewman wrote of how terrified they were to launch a mortar shell at the Marines as for every round they fired, the Marines would send ten back their way.

The MIS did their job faithfully back then on those hell hole islands.  Their job was to help kill the enemy.

Today, albeit in a roundabout way, MIS veterans like my father are still doing their job.

Last week, a representative of the “Japanese American Veterans Association (JAVA.org)” contacted me again to enlist the help of my father.  As mentioned in an earlier short story, Dad was a “kibei“, or an American of Japanese descent who got schooling in Japan.  He was fluent.  More so, he still is fluent in reading the pre-war Japanese writing.  There really aren’t that many left with this ability.  Dad is 93.

Unfortunately, Dad had a bad fall the day the request came in.  He fell flat on his face and shattered his glasses in the process.

Apparently, a gentleman had in his family’s possession a captured Japanese flag.  Presumably, someone in his family brought it back as a souvenir.  Of course, if an Allied soldier brought one home, it may have been removed from a corpse.  In the best case scenario, it was taken from a prisoner.  You just didn’t find them laying around on the battlefield.

According to the request, the owner of the flag stated he wanted to return it if possible to the family.  Not an easy task – even for “I Dream of Jeannie”.  These flags were created at the farewell party of a soldier who was going to be dispatched to the war and certain death.  There is usually the name of the person for whom the flag was presented.  If you are lucky, the flag may have a city or town written.  I’m sure my Uncle Suetaro received one.

Even for Dad, the complicating factor is not knowing how to read a Japanese character.  It is HOW it was written.  These were all signed by brush and charcoal ink.  The ink lasts forever since it is carbon.  But have you ever tried reading signatures?  Try your hand at this one:

You get the picture.

Anyways, Dad – and while his glasses were shattered in the fall – was able to say the person for which the flag was signed was likely for a Mr. Tokio Miyake.  Unfortunately, there was no true town or city named specifically.  Nevertheless, we were able to make out what appears to be “Kurayoshi Mayor”, or the mayor of “Kurayoshi”.

Last night, I did a little reserch and almost unbelievably did find a town named Kurayoshi.  I tracked down the town’s website and sent a blind email (in my broken Japanese) to the mayor’s office and asked if there was a mayor named “Furuya” during the war.

While my Dad did not participate in the hostilities, his Nisei unit did their job and greatly shortened the war according to General MacArthur.  The Nisei’s job was a true secret weapon.

Hopefully, this no longer secret weapon can serve some peacetime good and bring two families to peace.

Oh.  That was Johnny Depp’s signature.  Thought you ladies may like that.