After filming the second flag raising, Sgt. Genaust did some more filming of the battle.  A few reels focused on litter bearers carrying young deceased Marines.  Some footage was shot of a Navy Corpsman rendering aid to wounded Marines.  But the most foreboding footage depicted the cave-by-cave elimination of Japanese soldiers.  All in all, he shot 23 Kodachrome rolls, each about four minutes in length.

Roll 23 was shot on March 2, 1945.  In a documentary, the roll begins with Genaust holding the paper identifying it as #23.  But amongst all the fear, violence and carnage, he is still wearing his wedding band.

In this roll, there was some brief footage taken of a Corpsman rendering aid to a wounded Japanese soldier. It would be his last roll.  He would not be picking up a camera again.

It apparently rained for a couple of days after shooting roll #23.  On March 4, 1945 and according to various interviews, it appears that Sgt. Genaust, as a rifleman, accompanied a patrol with the 28th Marines.  Their objective was Hill 362.¹

They came upon a cave opening.  They had to clear it then seal it.  Grenades were thrown in.  With the confusion of battle, casualties and time, specifics are varied but it is clear Sgt. Genaust entered the cave with flashlight at hand.  After a brief period, Japanese machine gun fire erupted from within the cave.  As in many other instances, Sgt. William Homer Genaust, USMC, was gunned down; he became one of the 5,931 Marine deaths on that godforsaken eight square mile sulfuric island.²

The Marines decided it would be too dangerous to enter the cave, not only to kill the enemy but to retrieve the body of Sgt. Genaust.  According to USMC procedure at that time, grenades were hurled into the cave opening and it was seared with flame throwers.  TNT was then used to seal the opening.  Sgt. Genaust would not be recovered.

He was killed in action nine days after filming atop Mt. Suribachi.  He never lived to see his historic footage nor of its impact on patriotism… but Adelaide, his wife, would.

But she would be viewing it in a way you may not expect.

The processed USMC color motion pictures were apparently divided into two batches: D-Day to D+8 (containing Genaust’s flag footage) and D+8 to D+18.  The first batch went to the Joint Staff in DC; the second batch was brought in by Norm Hatch.

After review by the Joint Staff, the footage was sent to… Hollywood.  They would use such footage for newsreels or documentaries.  The Kodachrome 16mm footage would be blown up to B&W 35mm movie footage for use in theaters and the like.

The first time Genaust’s footage (uncredited) was made public was in the Universal Newsreel of March 19, 1945 with a caption of “Old Glory Flies Over Iwo Jima”.  It was a seven second clip.

The next time the footage was shown was in To the Shores of Iwo Jima, with the production supervised by Norm Hatch .  The flag footage, in the middle of the documentary, aired on June 7, 1945.  Incredibly, the fighting on Iwo Jima was still going on. (YouTube link below is set to begin at some of Genaust’s footage of flame throwers on D-Day; his flag footage is at around the 10 minute mark.)

The footage became one of the inspirations for Sands of Iwo Jima.  It was also used in the TV series, Victory at Sea, which I watched as a youth over and over.

On April 25, 1945, Adelaide received the dreaded telegram… just like hundreds of thousands of American mothers and wives of that time. That is how she learned of his death.

According to an interview of Sgt. Genaust’s nephew in a recent documentary, he said Adelaide did not realize nor was told the famous footage was taken by her husband.  Upon learning her late husband was the cinematographer, however, whenever Adelaide would go to a movie theater, she would constantly see the footage.  I can imagine in her heart, the hurt would be renewed and badly.  She soon stopped going.  Later, the footage would be also shown when TV stations used to sign off for the night.

It also appears that Adelaide wrote a letter on May 7 to Lt. Colonel Donald Dickson, her late husband’s commander.  It is but my guess but since Sgt. Genaust was declared missing in action (as per procedure), Adelaide may have written Dickson and asked of the possibility he may have been captured.

Dickson replied with a courteous and respectful three page letter (Undated, letter in its entirety. National Museum of the Marine Corps): 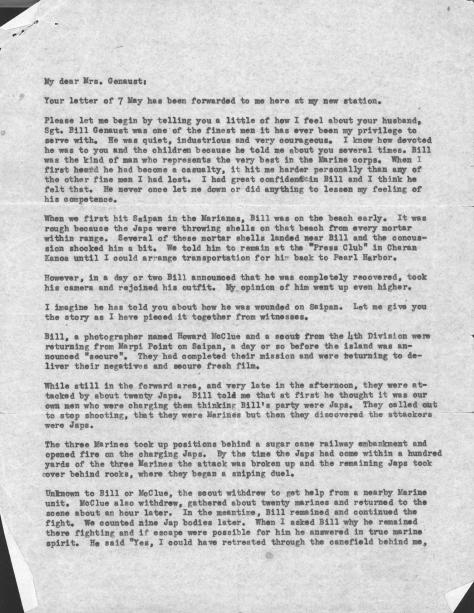 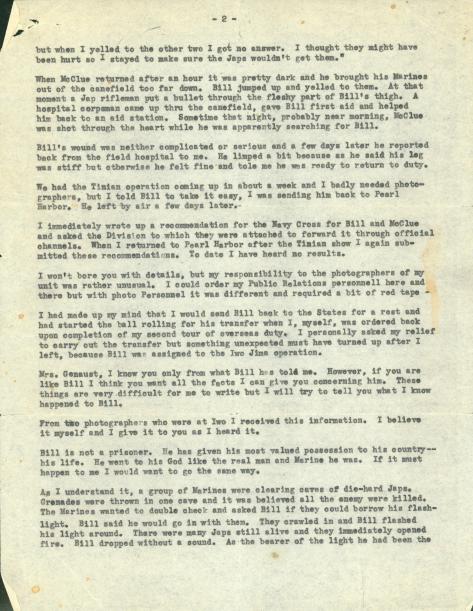 And in a wretched twist, the US Post Office delivered to Adelaide a letter months later.  The letter had been written by her husband a couple of months before his death.  Upon reading the letter and in anguish, she threw it away.

You see… it was Adelaide who convinced her husband, William Homer Genaust, to become a combat cameraman for the United States Marine Corps.

Now he was gone.

Both flags are in the possession of the National Museum of the Marine Corps, located just outside the sacred grounds of Marine Corps Base Quantico in Virginia.

In spite of attempts in 2007 and 2008, JPAC has been unable to locate the remains of Sgt. Genaust.  However, another viable lead has reportedly surfaced.  An Army veteran who was stationed on Iwo Jima from 1946 – 1947 clearly recalled seeing a wooden sign which read “Bill Genaust died here”.  However, it was reportedly on the north side of Hill 362A, not the SW side where JPAC was targeting.³  This has been rejected by the US military.

May his soul be at peace… as well as Adelaide’s.

As the Marines say, “Once a Marine, always a Marine.”

This closes this series.

1.  According to such sources, there was an US Army Nisei linguist on Genaust’s final patrol whose job was to talk the Japanese out of such caves.  All in all, there were over 50 Japanese-American Nisei’s on Iwo Jima.  One (Sgt. Mike Masato Deguchi) stepped on a land mine and died from his wounds after war’s end.

AP press photographer Joe Rosenthal spoke highly of the Nisei he observed on Iwo Jima, saying they were there to prove they were Americans (per Nisei Linguists, Dr. James McNaughton, US Army Historian).

2.  One of the greatest Marines in history, Gunnery Sergeant John Basilone, MOH and Navy Cross, was also killed on Iwo Jima on the first day of the invasion.

3.  Japan still makes recovery visits to Iwo Jima.  They are still uncovering Japanese remains, some of which have become mummified.