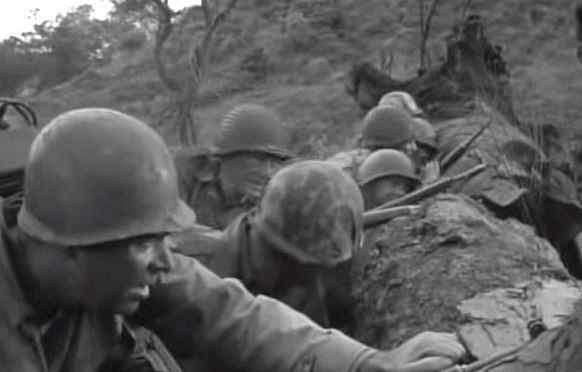 The Weapons, Equipment and Explosions

People who watched Combat! from the get-go pretty much think of Sgt. Saunders in their mind when they see a Tommy gun and Lt. Hanley when they see a M-1  carbine, yes?  The power of media herewith.

But the truth of the matter is both Saunders and Hanley started out with the 30.06 firing M-1 Garand rifle as they hit the beach at Omaha Beach on D-Day in the first episode which began shooting on June 2, 1962.

And they both had standard issue steel helmets.

As proof Sgt. Saunders “went over the side” with a M-1 Garand in Episode 1’s D-Day, here he is trying to board his landing craft #PA-142 (The landing craft PA-142 does show up in real D-Day footage.) with it slung over his shoulder.  He also has on a standard issue two-piece steel helmet:

He carries this weapon throughout the first episode…but never fires a shot.

In Episode 2, no one fires a shot.

However, his Thompson and his distinctive camo helmet shows up ever so quietly and out of sequence series-wise in Episode 3 below:

However, before he fires a shot, he is captured by the Nazis.  He loses his Thompson and camo helmet as he is taken prisoner.

So when does Saunders get to shoot?  Read on…

In Episode 5, Saunders’ trademark camo helmet makes its permanent re-appearance for the rest of the show.  But how did he become the one and only to wear such a distinctive helmet?

Because to make my mom feel more overcome with his macho? Nope… It was because he… complained!  Sorry to blow another iconic image you may have had of your childhood idol.  According to statements made by Morrow and others per various websites and interviews, Morrow had begun to complain that the weight of the standard issue steel helmet was compressing his vertebrae on those week long shoots.  Therefore, it was replaced with a custom made, lighter fiberglass one, designed by the award winning prop crew.  The helmet’s camo covering – which is bona fide US Army paratrooper parachute material that was used in Europe – became necessary to hide the fact the helmet was fiberglass.

The US Army paratrooper camo patterns, colors and construction differed from the Marine versions (sometimes nicknamed “frogskin”) for which it has frequently been mistaken.

In a comment made by one of the directors, he jokingly said the oddball helmet covering made it easier for the cameramen to follow him.  One other bit of trivia on his helmet: one drawback was that it was so light, it would fall off when he would “hit the dirt” or bump it against an object.

Like any other American boy, I wanted a Tommy gun so bad so that I could pretend to be like Sgt. Saunders.  Many other boys wanted it, too!  But alas, dad couldn’t afford one.

But I did get a cap gun, holster and cowboy hat when I was about four, believing they belonged to Roy Rogers:

As for his Thompson, which fired .45 caliber rounds, here is a real one in full auto in case you’re new to this:

But back to the TV Thompson and I won’t go into discussions of what model it was because there were apparently several in use… including a wooden one.

Yes, a wooden one.  Sorry to burst your bubble once again, guys. 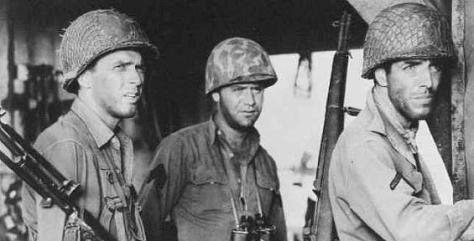 After Morrow lugged a real one around for a couple of weeks, he realized why Jason turned it down.  For argument’s sake, a real one weighed roughly about 10-1/2 pounds empty.  Can you imagine what a real soldier or Marine thought when he would lug it around while actually getting shot at and likely suffering from dysentery?  The prop men therefore fashioned one out of wood for Morrow.

Saunders would carry the wooden mock up when walking or running during a shoot.  Weapons experts can spot it a mile away.  He would then switch to the real Thompson for a firefight.

However, the set version of Saunders’ “real” Tommy gun was not without problems as it was modified to shoot blanks.  According to various sources, the barrel was choked down¹ for set use.  The weapons guys thought by choking it down, the spent cartridges would eject better.  However, they were wrong.  For you Combat! buffs, do you recollect Saunders firing the Thompson in long bursts?  I don’t think you will.  Saunders only fires it in 2-3-4 round bursts as it would jam up³.  He had a nickname for it: Jammomatic.  In some firefight scenes, you can see Saunders trying to unjam it.  Cut!

So…to answer the question when Sgt. Saunders finally get to shoot anything?²  Indeed, it was his trademark Thompson in Episode 5.  He and Hanley locate a sniper while under fire and he lets lose two single shots.  Not a spray, mind you.  Hanley also fires his M-1 carbine for the first time as well.

Lastly, many collectors years ago were seeking to find this Thompson that Sgt. Saunders made famous.  While some stories vary, the most common answer is that the several Thompson’s that were used in the series were rented from Stembridge Rentals, a common source for Hollywood at that time.  As a result, this famous prop is likely lost for all time.

Rick Jason and His M-1 Carbine

As mentioned, the Thompson was originally meant for Lt. Hanley.  When they first handed him the Thompson, he said no way.  “Get me something lighter,” he said.  You see, he knew about guns being a hunter; he even did his own reloads.  And that’s how Saunders eventually got the Thompson – it was basically a hand-me down.

His M-1 carbine was also choked down for use with blanks.  However, with him being the only one of the regulars being an avid shooter, he looked the most natural shouldering a weapon.  He once wrote that the real M-1 carbine’s round wouldn’t kill a “sick mouse”, implying it had no stopping power.  However, during the Battle for Okinawa in 1945, websites report that 75% of the Japanese casualties were inflicted by M-1 carbine rounds.

For those of you who have not seen one of these fire, here is a video.  As there is a bayonet stud, it may not be true WWII vintage but the message is clear.  It can take down a sick mouse with ease.  While watching this, imagine you are 18 years old on a hostile battlefield:

So what happened to Lt. Hanley’s actual M-1 carbine?

According to a letter he wrote, Rick Jason stated that against the studio’s direction, he simply took it home.  While it was registered to the Culver City Police Department, he told the prop man that after lugging it around on the sets for five years, it was his.  Period.  So he stole it… I mean, took it home on a permanent basis.

After taking it home, he wrote he poured lead into the barrel to ensure it cannot be loaded and then accidentally fired.  He then left it in his cabinet for about four years.

Shortly thereafter, the well known comedian Charlie Callas stopped by Jason’s home and quickly spotted the M-1.  Being a gun collector, Callas immediately figured out it was the one Jason had made famous on Combat!  After a few libations around the pool, Jason gave it to Callas as it was “taking up space where a nice rifle could occupy”.  Before Jason passed away, he indicated that Callas still had it in his collection.  However, Callas passed away in 2011; I haven’t come across any mention of “Lt. Hanley’s M-1” since then.

By all accounts, Combat! was blessed with an excellent special effects team, headed up by A. D. Flowers.  Flowers would eventually win an Oscar for his work on Tora! Tora! Tora! years later.

While many “explosions” in movies today are computer generated, the explosions and bullet impacts on walls and such filmed on “Combat!” were actual controlled explosions.  Vic Morrow always said that the actors felt very secure and safe in spite of all the explosive commotion due to Flowers’ exacting expertise.

While far from an actual barrage (I cannot imagine the horror of being at the receiving end of real ones.), the special effects team and cameramen did a spectacular job simulating them for TV.  Here’s an example:

To accomplish this, the special effects team would actually exactingly dig holes, plant the explosives called “pots”, then run wires.  When you hit the switch, the explosives would go off.  These pots – made out of iron at that time – would be narrow at the bottom and wide at the top.  This “shaped” the “explosion” up, protecting the actor.  A portion of the pot would extend above the ground then was covered by peat moss which could not be made out in the movie footage.  Actors had very specific routes to run but safety was the rule.

I cannot be certain but for the above footage, Flowers said in an interview that 20 special effects guys were used at a cost of $25,000 for two days and 300,000 feet of electrical wire was run.  He also said that in a three month time, they blew up 1,500 bags worth of peat moss.

“Squibs” were used to mimic bullet impacts (above).  For wood, they actually drilled a hole into the wood for every scripted bullet hit then inserted a small charge connected by wire to a control switch.  Extra care had to exercised to ensure the safety of the actors and crew as at times, the charge would be stuffed with balsa wood pieces and powder.  In the same three month period mentioned directly above, 15,000 bullet hits were used.  Incredible.  Dust pellets fired by air guns were used to mimic bullet hits on masonry.

What happened to the regulars, final bits of trivia and a conclusion in Part 4.