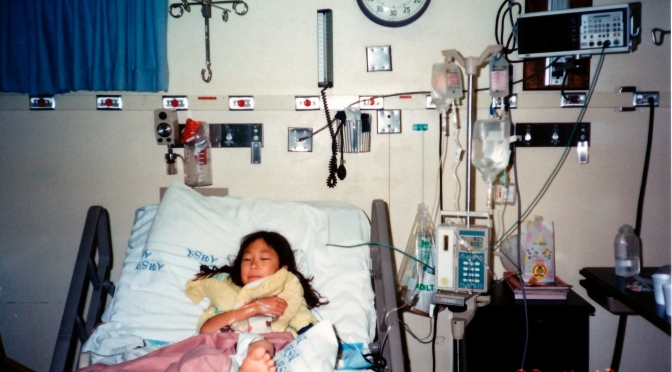 Because I am Buddhist, it is difficult to fathom the importance religiously of today, Good Friday.  One of my most trusted friends of old, Don, partakes in a play each Good Friday at his Catholic church of which he is a most faithful member.  I feel some sadness as I am unable to grasp the deepness of his love for his God or the significance of this day.

My oldest daughter was home as there was no school.  She was nine at that time

Playing in her bare feet, she was bitten by a rattler in the front yard of my home.

Yes, my memory is not all that accurate, Robyn, but it was late morning.  I was working in Downtown LA that day when a call came into my office.

When I picked up the phone, it was her mom.  You have to understand her to appreciate this but she said pretty calmly, “I think Robyn got bit on her foot by a snake.”

“Huh?  Whaaat?  Where?  Are there puncture marks?”

After a minute, she comes back and matter-of-factly says, “Umm, yes, there’s two little holes on her toe…”  It was as if she was telling me Robyn got straight A’s again.  Very routine for Robyn.

“Call 911!” I said quite loudly then hung up.  I ran to my boss’ office and yelled, “I think my daughter got bit by a rattlesnake!  Bye!”

Did I mention I was the opposite of my ex-wife?  I got pretty “animated”.  It was different than being told she got straight A’s again.

Remembering this was before inexpensive cell phones, I raced home.  It took about an hour to drive the 25 miles, even back then.  When I got there, no one was there.  But a neighbor told me the paramedics took her to Brea Community Hospital.  “Huh?  Brea Community?  Where’s that?!”  No Google Maps, either.

If I recall correctly, I got to the hospital about two hours after the call.  Apparently, the paramedics were going to medivac her when they located this hospital with anti-venom in the neighboring county.

It was the darnedest sight.  Here were these two pretty rugged-looking paramedics in Emergency, rubbing their huge hands together like if they were outside in the snow.  Briefly, her mom explained yes, it was a rattler.  The doctor wasn’t sure what anti-venom to administer at first but after calling a specialist in Arizona, they decided on the anti-venom.  However, the anti-venom coagulates at the top of a suspension liquid in these tiny glass tubes.  The paramedics were rolling these tubes in their hands to warm and melt/dissolve the anti-venom into the liquid.

My daughter, a pretty tough kid, was just laying on the gurney quite bravely.  She didn’t whimper, complain or show fear.  She would be that way for the rest of the night – well, except for a split second.  In fact, the only time she would show emotion was when she pummeled her younger brother – frequently.  He apparently deserved it.

There was cause for alarm, however.  The first responders were able to locate the snake in the strawberry plants then lopped off its head with a shovel.  But it was a baby rattler.  For those of you who don’t know, baby rattlers are unpredictable in how much venom they would inject for a kill.  Luckily, it had killed Mickey Mouse a bit earlier (or maybe it was Minnie), thereby somewhat depleting its venom supply; you could see the bulge in its body from the mouse (Yes, they put it into a glass jar to show the doctor.  Yes, we kept in the freezer for awhile as a souvenir.  I even took it to show my boss.  Who would believe a nutsy story like this?).  Plus, Robyn was a small girl.  Smart, but small.

They began the drip as soon as possible… but by around 11 pm, you could clearly see the toxins marching its way up her leg, discoloring her skin as it spread.  The swelling got real bad, too.

Then, the news.  The nurse said if the swelling doesn’t subside by around midnight, the doctor will have to make an incision in her calf to relieve the swelling.  Further, they did not know if there would be any permanent tissue or nerve damage.

Talk about feeling helpless…  All we could do was wait.  By this time, her skin began to turn an ugly shade of grey.

Then for the first time that day, Robyn understandably let out a tear or two.

Fortunately, about an hour afterwards, the toxins stopped its march up her leg.  The anti-venom was finally taking effect.  Soon thereafter, the swelling began to subside, slowly but surely.

By late morning – and while the skin was still an ugly shade of grey – a physical therapist came in.  Oddly, she was the owner of an interior decorating store at the base of our hill; she had sold us all our new furniture and interior stuff like wallpaper and window treatments five years earlier.

She had Robyn get out of bed then try to walk.  Although she had a bad limp from the pain and tenderness, the therapist said there was no nerve or tissue damage to her foot or leg.  Whew.

And the Game Boy?

I thought she earned it for being a tough kid so I got her one.  She got pretty good at it, too.

Oh…  Although Robyn’s name wasn’t mentioned, her mom told me later that she made the news on KFWB news radio.

They didn’t mention her new Game Boy, though, or how brave she was.

Star Trek is alive and well… in Israel.

Even though the breakthrough imaginary crew of Gene Roddenberry did not include a Jewish character.

Indulge me here…  especially one blogger who indulges in green smoothies… but this sets the stage:

Chekov is miraculously cured though the repair of a ruptured brain artery – without drills, scalpels or stitches.

The surgery is performed by a miracle device placed on his forehead.

An Israeli engineering company has developed a prototype “knifeless” surgical instrument using ultrasound.  It utilizes 3D imaging to control the precision targeting of the ultrasounds to eradicate a growth.  You ladies will find it interesting – one potential application is removal of uterine fibroids.  Another use depicted is the treatment of Parkinson’s.

Please watch.  As Spock would have said, “Fascinating”.

As you Trekkies may know, Dr. “Bones” McCoy is noted for his famous “doctor” quotes.  In “Mirror, Mirror,” Dr. McCoy says determinedly to Capt. Kirk, “I’m a doctor!  Not an engineer!”

This doctor of the future IS an engineer.

And most of all, thank you, Mr. Roddenberry.

One year ago tomorrow.

To be with his beloved wife Carol…and his comrades who were left behind “on those stinkin’ islands”.

Life is so fleeting.  Some people go through a whole lot.  Some of us don’t.

Old man Jack was one of the former.  I need to find the time to write more of what he experienced as a young man.

So that at least those that read this blog will know…and appreciate.

Old man Jack had his health problems in his last years.

But when he was a young sailor, he had malaria, dysentery…leeches between his toes, all from fighting on those damn islands in the Southwest Pacific during WWII.

And in 2009, he nearly died from a horrid intestinal infection.  His abdomen had swollen.  Fat Albert would have been jealous.

He was in ICU for a couple of weeks.  After they transferred him to an extended care facility, I made it a point to see him every day…even if it was for brief time.

He looked forward to it as did I.

But soon after being transferred, he went into a depression.  He wouldn’t eat – especially what he called the “Army slop” they had at his hospice.

Man, he complained about the chow – but his eyes lit up when I (secretly) took him a Mickey D’s burger and fries once in awhile.  He’d smack his lips.  But I’d make him eat the chow when I didn’t bring him his hamburger and as usual, he’d get pissed.  But not really.

One evening, he was really weak.  He wouldn’t raise his head off his pillow.

He never answered the question but he was off in a different world.  While he realized I was there, he said to me softly, “Carol came down to see me last night.  She sat right here,” gently patting the mattress on his gurney.  “She said, ‘Honey, its about time now.  I’m waiting for you.'”

Carol was his wife.  He loved her greatly.  She had passed away eight years before.  I think he wanted to be with her.

Well, I pushed him to get better.  And he did.

He finally consented to get into a wheel chair a couple of weeks or so later.  I can’t exactly remember but it was June of 2009.

Perhaps you can get a flavor of Old Man Jack’s true character although my Blackberry did a lousy job of recording:

Soon after that, in spite of his pissing and moaning (which I loved as it meant he was getting better), I forced him to use his walker:

It was his way of saying, “Get lost,” by the way…but didn’t mean it as usual.  He loved the attention.

Old Man Jack was on the road to recovery.

Well, the recovery was short-lived.

He is now with his beloved Carol and eating her wonderful cooking.  She cooked things exactly as he wanted.

He never complained – as he knew he wouldn’t eat if he did.

Deep down, he knew who was the boss.

I miss you and your hollerin’ and moanin’, Jack.

And I knew you never meant it.

And as sad as I am, I also know you are now free of those horrible nightmares from combat that you endured for 70 years…and that you and Carol are on your second honeymoon.

You deserve no less.

You were a helluva representative of the Greatest Generation.