The last few privately taken photos of an American president before his death were in an old Japanese lady’s photo album. 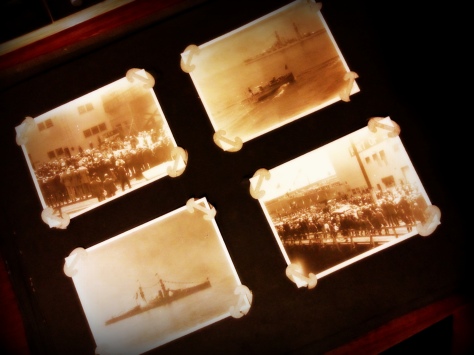 These four photos had intrigued me.  They had caught my eye earlier but there were other precious photographs to scan and retouch.

But the curiosity killed this old sourpuss.

I had to scan them… and there were fantastic discoveries.

President Harding, our 29th president, arrived in Seattle on July 27, 1923.  He was on a 40-day tour of the Western United States.

He would pass away just six days later.

After collaborating with a flickr buddy and author, Shawn Hennessey, we came to the conclusion that this indeed was President Harding’s motorcade at the Port of Seattle.  Of course,  we will never know for sure who took these photos but they are of the same size and finish of many of Grandmother Kono’s other photos of that time period.  Still, they are remarkably an incredible capture historically.

They are unretouched.  I thought they look better as-is.

You can clearly make out the Port of Seattle signage with the beginning of “Bell Street Pier” on the building.  Note the US Marine and US Navy color guards.  It is likely President Harding’s destroyer that is docked at pier’s end.  The blanket of flowers can be seen on the hood of the President’s limousine, too.

The President can be seen closer below.  Of note is the agent standing on the limousine’s running board – or more specifically, his clothing.  Compare his clothing to other images you can find on the web.  You will see gentlemen doffing their hats to the President as he passes by.

Just a glimpse into American history – from a Hiroshima photo album.

I hope you all won’t mind if I feel Grandmother Kono took these pictures in 1923.