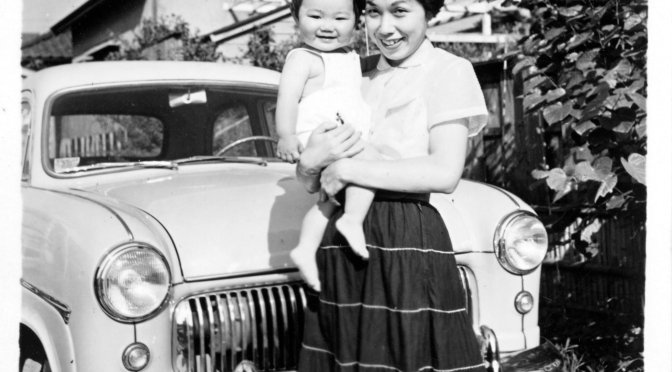 Nearly all Americans would agree that hamburgers are the All-American icon.  A simple grilled ground beef patty, salted and peppered, slathered with mayo, mustard and ketchup then sandwiched in a plain bun.

At least that’s how I know them.  Oh, hold the pickles, please.

Now, us kids that grew up watching “Bewitched” and “I Dream of Jeannie” have given birth to a generation that has taken a simple thing and made them into $15 gourmet, fancied-up, mushroom-covered (expensive) cuisine.  Do you think I like Elizabeth Montgomery and Barbara Eden?  Drool…

But I don’t know if I like the “change”.

Back to this in a minute, folks.

The fancy hamburgers – not the drool.

Dad had always owned Fords when he could finally afford getting a car.  I guess that’s where I get my Ford passion from.

After leaving Japan for the last time  in the late ‘50’s after the Occupation ended, my pop bought his first new car stateside in 1963 – he was 44 years old.  It was a two door Cascade Blue 1963 Mercury Meteor custom hardtop; a king of obscurity to say the least, but to a kid of about ten, it was Flash Gordon’s rocket ship.  Unlike Hillary, it was easy to love this car.

Don’t get me wrong.  It wouldn’t get a choice spot if valet parked.  I say wouldn’t as my old man couldn’t afford valet, let alone a family dinner out.  But to me, the rocket ship had a chrome finish AM push-button radio – turn the dial on the right, find a station, pull out a button, then push it back in to set it.  Trouble is I did it a dozen times each time I got into the car.  But all I cared about was KFI 640 AM, the Dodgers’ station.  The golden voice of Vin Scully… and Fairly, Gilliam, Wills and I forget who played third.  They were World Series champs that year.

Six adults could get into this rocket ship with room to spare – eight of us little Japanese folks and a dog.  The cargo hold in back swallowed up my Sears JC Higgins bike in one gulp with enough space leftover for Frank Howard.  (I saw him hit the scoreboard in right field with a home run.)

Unless my aging grey matter is dissolving at warp speed (maybe it is), there were ash trays with shiny covers in each armrest…and this was for the back seats.  It was a favorite depository for my Bazooka chewing gum but I kept the wax covered cartoon that came with it.

And as it was the only car we had back then, I also drove my date to one of my senior proms in it (I went to two.).  And the answer is, “No,” if anyone was wondering…but I’m sure she was disappointed.  Well, maybe not.

The four-wheel drum brakes were spectacular…not.  Instead of rubber meets the road, it was like rubber met the world’s supply of Vaseline while fighting the pull to the left… and this was at 25 mph.  Steering?  An oil tanker’s captain would do well.  Turn the wheel a lot; see the slight change in direction a few seconds later.  Pat Brady and Nellybelle turned better – and that was out in the desert on sand.

I overhauled the epoch 164 hp 260 cid V8 sometime around 1976 in our garage.  At 13 years of age, she had become an old girl.  She had become a V6, meaning it had lost compression in two cylinders.  I remember setting zero lash, then three-quarters turn of the ratchet for the hydraulic lifters during the overhaul.  The distributor was the biggest headache, of all things.  It was like extracting an impacted molar and only after using copious amounts of Liquid Wrench in place of laughing gas did it finally come out.  “Older” Blue Oval guys know what I’m describing.

Back to today’s elegant hamburgers and change.

Instead of the push-pull AM radio, my youngest son – who was seven when I bought it – similarly discovered my ’08 Mustang GT had a “My Color” dashboard light feature.  Now I know how my pop felt as my son forced me to experience every color of the rainbow while driving at night – every time.  It was like being at an all-night disco club.

Bazooka bubble gum and ashtrays are no more but treasure hunters will be pleased after exploring the map pockets.  No disappointments there.  I promise… especially after my little Cake Boss had sat in the back.  Latex gloves are highly recommended before exploring.

Overhaul it?  After all, my GT’s got a 281 V8, only twenty-one more cubes than my pop’s…but it pumps out a magnificent 505 hp thanks to her Roush supercharger and Carmen pulley.  Hell, I’m afraid to change spark plugs.  Who would imagine in 1963 there would be a TSB on just how to R&R spark plugs?

And unlike my pop’s ’63 Merc which ran on simple mechanical principles (but threw physics principles out the window for the so-called braking), the computing power in my Mustang would cause Einstein to strike a pose like Captain Morgan.

And today’s stunning braking power is the true reason for seat belts – it compassionately keeps your head from being continually used to redesign the windshield.  The aftermarket Wilwood six-piston disc brakes I installed with slotted and cross-drilled rotors exacerbates the stop-on-a-dime tendencies… which is a good thing.

So it appears the delicious, basic hamburger of the 1960’s has been brought into the 21st Century.  Kids that watched Elizabeth Montgomery and Barbara Eden fooled with the wonderfully simple ground beef and bread formula to give us today’s foodie gourmet burger…and we can still listen to Vinny’s golden voice, to boot.  Glorious.

And well, with 505 hp at the crank instead of 164 hp, it’s hard to complain.  Neither do my kids when they hear the whine of my Roush supercharger.  They like to scream.  But it’s a shame my pop’s ’63 Mercury Meteor won’t be swept into anyone’s museum.

I guess technology has its benefits.

I’ll take a gourmet burger in the end after all.

At least that hasn’t changed.