As I watched “How to Train Your Dragon” on Blu-Ray for the third time with my kids, it became clear that knights in shining armor kill dragons…and only in fairy tales.

A tremendous Einstein moment for this old geezer.

But then I realized that sometimes, what we read about WWII history can be sort of a fairy tale, complete with a knight in shining armor trying to slay a dragon… the dragon being what truly happened in war.

History becomes what the writer – or a leader – wants it to be in the public domain.

Unknown to many is that another battle raged after the surrender of Japan.  It was about what was to be recorded as an official history of WWII.  It was a battle involving glorification, greed and politics of both the victors and the defeated.

And of course, it involved General of the Army Douglas MacArthur.

First, a quick opinion and summary of MacArthur from this arm-chair (amateur) historian’s viewpoint.

MacArthur had a helluva an ego as did George Patton and Bernard Montgomery.  He was suspicious, short tempered, short on patience and embittered.  MacArthur – as did Patton – studied military history extensively; he loved Napoleon.  As commander, he failed to appropriately alert the troops under his command in the Philippines immediately prior to Pearl and worse yet, in the hours after.  He had to flee the Philippines on a PT boat along with his family to avoid capture leaving behind his troops.  However, supported by a brilliant, top notch staff and highly critical intel derived from intercepted then deciphered Japanese transmissions, he was highly successful in winning the war in the Pacific.  He was a hero at war’s end to his great gratification.  He was so loved by the American public that quite a few babies were named Douglas.

Primarily due to a ridiculously small and inexperienced staff, only a relatively short written history of WWII in the Pacific emerged in late 1946 to the chagrin of MacArthur.  He immediately then placed Major General Charles Willoughby in charge of generating an “official” history.

Willoughby was in charge of the US Army’s G-2 (i.e., military intelligence) in the Southwest Pacific theater of war and was trusted by MacArthur.  (I briefly reported on Willougby in “Ike, a German-American Soldier”.)  Having a heavy German accent, Willoughby was very loyal to MacArthur, pompous and stoutly anti-Communist.  He seized the opportunity to “write the history” on victory in the Pacific under MacArthur’s leadership.

The tiny staff then blossomed under Willoughby to over 100 and was headquartered on the 3rd floor of the “NYK Building (Nippon Yusen Kaisha)” just a block from MacArthur’s GHQ in the Dai-Ichi Seimei Building; both are situated directly across the Imperial Palace.  (Coincidentally, my dad was stationed in the NYK Building on the 4th Floor as a US 8th Army Technical Sergeant, 3rd Grade in Willoughby’s G-2. He is pictured below with the edge of MacArthur’s GHQ seen on the extreme right. The NYK Building is off the picture to his left.  Behind him is the moat of the Imperial Palace.) 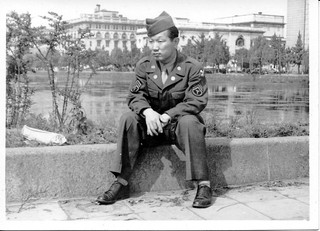 Seeking glory in this mission, Willoughby recruited by the end of 1946 top Japanese military officers, spies and even war criminals.  Each had their own personal goals and copious amounts of US money flowed into these Japanese hands.  One Japanese officer who Willoughby met in Manila was the Imperial Japanese Army’s Lt. General Torashiro Kawabe (photo above).  Amazingly, because Kawabe also spoke German very well and was anti-Communist, he and Willoughby struck it off well.

A short time later, still in 1946, Willoughby met Lt. General Seizo Arisue who was the intelligence chief for the Imperial Japanese Army.  By sheer luck, Arisue was also fluent in German and a staunch anti-Communist and reported he had the extensive spy network in place mentioned above.  A triad had thus formed and the project to document history took off but with a twist: to Willoughby’s credit, he foresaw a “dual” history.  As history always gets written by the victor, Willoughby wanted two volumes.   One would be the US side of the story, the second volume to be Japan’s.

In early 1947, Willoughby was introduced to a former colonel who served at the Imperial General Headquarters in Tokyo during the war.  His name was Col. Takuhiro Hattori.  Hattori was known to both Kawabe and Arisue as a genius in planning and organizing.  Hattori eventually became the person from Japan’s side to determine what went into the war history.

Generous money flowed through Willoughby to Kawabe and Arisue, reportedly to help fund the spy network.  Along the way, they brought in an “Issei” (a Japan-born first generation immigrant to the US like my grandfather) plus a university professor named Mitsutaro Araki.  He also received education in Germany but no history would be complete without sexual escapades.  Professor Araki’s wife was a socialite who used her beauty to charm others, primarily men.  Her name was Mitsuko Araki. As a bit of trivia, Mitsuko was the only Japanese who was allowed free, unhindered entry/exit to GHQ.  It was believed the CIA concluded she and Willoughby were having an affair.

In his efforts to make his recorded history unique, Willoughby paid Mitsuko to find and compensate artists who could paint battle scenes from Japanese eyes.  He felt photos were too ordinary plus many were from US sources.

To be continued in Part 2.