Although not an indicator of quality, my macro shot of a lily got selected for “Explore” on FLICKR.  It was one of 500 “interesting” photos of May 2nd and FLICKR states over 1.4 million photos are uploaded daily worldwide. 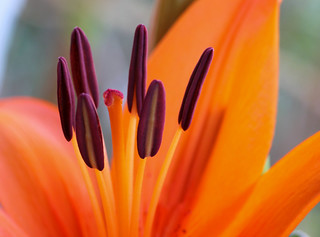 First of all, a thank you to Cee from Cee’s Fun Foto Challenge for selecting my shadow pictures as some of her faves last week!

And she selected flowers as the subject for her Fun Foto Challenge of this week:

I had a date last night…and she was a varsity high school cheerleader, no less.  Any man’s dream as they say.

It was the most wonderful evening for me in close to two decades.

Oh, her name is Mari Jo and very happily married.  Darn.  Double darn.  Her loving Husband was kind enough to “lend” her to me for our 40th high school reunion.  They both bought me my ticket to make sure I’d go to the reunion.  How embarrassing for a man of old ways.

Mari Jo and I have been friends since six or seven years of age – from around (ahem) 1960 or so.  We went to a great elementary school in the heart of East Los Angeles called 4th Street Elementary.  It still stands.  Brick auditorium, too.

She had a touch of freckles, blond hair with the slightest of curls and an infectious smile back then.  More than 50 years later, she still does.  Priceless.

True childhood friends.  The best.  No walls.  No mask.  Out in the open.

Nearly all of us were pretty much in the same boat.  Our families were trying to make ends meet.  Since we knew no other lifestyle, we all looked upon each other for support.  I see this in hindsight now.

It seems as if mom stopped by for this “May Day” dance perhaps in 1966.  Mari Jo can be seen being twirled around by another childhood friend Ralph – he’s the tallest one on the left.

We were all blessed to have stayed together through what we called junior high school back then.  That school, too, is still standing.  Junior high school would end up giving Mari Jo a lot of memories – both painful and happy.  One of her proudest moments…  I think she looks fabulous, don’t you?

Mari Jo was cheerleading even in junior high.  She is at the far right.

In high school, our friendship continued.  Mari Jo was a popular young lady.  She was funny, outgoing and cared about others…and she was one of our varsity cheerleaders.  Odd that bubbly Mari Jo would be one.  Are you kidding me?

She is off to the far right – it is from a frame from one of my surviving negatives from back then.

Did I mention she was a ham, too?  She was one of my favorite candid photography subjects.  I was apparently known as the guy who always had a camera hanging from my shoulder.  While sports photography was where I exceled (with basic equipment), many of my photos ended up in the school newspaper or the yearbook.  I had taken tens of thousands of photos, then developed the negatives at the house then printed them.  And the friends I gave the prints to were happy… and that made me happy.  The plumbing was never the same after all the processing and printing.  That didn’t make my parents happy, I’m sure.

I treasured the negatives for decades…but about six years ago, my littlest firecracker Brooke decided to let the air out of an IMMENSE three tier inflatable pool full of water…  but the darn wife had put the IMMENSE pool IN the garage (where my CAR should have been) so that the kids would not get dark from the sun.  Why have an IMMENSE three tier pool bigger than Lake Erie if you don’t want your kids to get dark??

When my angelic Brooke pulled the plugs, the garage flooded – and all but one set of the high school negatives were ruined.  The prints from those precious days that survived were also gone…including my most favorite one which was a double-exposure of Mari Jo immediately after losing the football league championship game in the final seconds.

I last saw Mari Jo later that year – 1972 – after graduation.  She was moving to Las Vegas to get married.

While we had written a letter or two soon thereafter, for the next 37 years, I oft thought of Mari Jo (and of two other childhood friends, “Fritos” and Ralph)…  What happened to her?  Was she happy?  I was so angry at myself for failing to stay in touch…

Then…  I came across a lead.  I sent off another blind email like I did for my dad’s high school yearbook; I guess that’s my MO…  and she replied!  OMFG.

We learned of each other’s paths since parting.  But most of all, she was HAPPY.  That was all that mattered to me.  She is now happily married with two great kids…and a granddaughter!

But good ol’ Mari Jo…  She knows of my life’s recent events and she – with her good husband’s encouragement – came to my rescue last night.  If I can sum it up as best I can, she said basically you plan for life – but what happens is life.  Life is but ambiguity and dwelling does no good… to move on.

Before we met, I kidded her my hands were sweaty and that I was nervous…  like a certain escort she had one night when she was young.  She called me poop head.  Loved that.  But I was nervous.

She snuck up on me and surprised the dickens out of me… and man, it was worth it.  She looked stunning – gorgeous if I may say – but it was Mari Jo.  That same infectious smile.  From 4th Street School.  In East LA.

Speaking personally, I had the most grandest of times…  It started with Mari Jo screaming – just a tad.  After picking her up from her hotel, I did a burn out in my car.  It was just a little scream, Husband.  Really.  Well, it was more a case of Mari Jo sinking her manicures into the ceiling.

Needless to say, she was the most ravishing one there… and she was my date!  Thank you, Husband!

I felt so good, I did the cha-cha with her…  Well, kinda.  I had forgotten how to… but the song was “Suavecito”.  An East LA favorite.  My legs hurt this morning.

I won’t go into the reasons but the varsity cheerleaders and I overall had a special relationship – and four of the eight were there!

Aren’t I a lucky old fart?

Thanks for rooting for me, Mari Jo.  You blew in fresh air and helped rekindle a smothered flame.

An old flame at that.