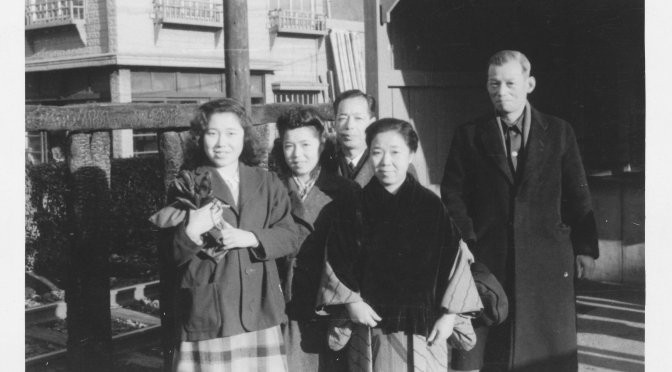 After a war’s end, the war for food continues for a losing country.  Japan was no exception.

In “There Be Gold in My Family,” Taro was mentioned.  He was miraculously able to track down my mother and Aunt Eiko in what remained of Tokyo after Japan’s surrender in WWII.  He was part of the US 8th Army’s Military Intelligence Service and had brought them much needed food, clothing and cigarettes.

After being discharged from the Army in early 1947, he returned to his family’s farming roots in Livingston, CA.  With his meager income, he still managed to buy clothing and shipped them to my mother and Aunt Eiko.  He was a kind and generous man.  To this day, they are indebted to Taro.

When war ended and the Allies began their Occupation of Japan, the population was in rags.  Many had no homes.

Everyday people suffered from poverty, filthy conditions, hunger, and food shortages.  In order to help distribute food, Japanese people were given assigned rations by the Allies.  This was put into motion quickly thanks to the Supreme Commander, Gen. MacArthur.  He ensured the most humane treatment possible under those wretched conditions.

In reality, living just on the rationed food often did not provide adequate nourishment, and a thriving black market developed amidst the constant food shortages.  Civilians lined up, waiting for their rations of beans as even rice was not available to them at that time.  (The last point is critical to this story.)  They also carried receptacles to carry clean water which was also rationed.  As many young Japanese men were killed, a majority of those lining up were the elderly, women and children.

Of course, Americans were issued food ration stamps as part of our war effort back home and textbooks show many photos of starving and tortured American prisoners.

She recalls how “Western” they looked.  Especially since the outfit was a BRIGHT blue.  Very American.  Very NOT Japanese.  Madonna-esque.  You can tell by looking at the clothing the women were wearing in the food line picture.

Aunt Eiko was so happy though.  She wanted to show off her dress but was fearful of the ridicule or demeaning comments she may receive from passerbys.  You see, even in 1947, only a small minority “had”…  The vast majority were “have nots”.  Neighbors would turn their backs on those that appeared to have received favors from the conquering Americans.

Nevertheless, she was too happy and wore the ensemble through the still decimated Ginza.  She caught a photographer’s eye.  She was asked to model.  So she did.

The photo series ended up in a magazine, a rarity as paper was still in short supply and very expensive.  Another case of have versus have nots.

Although the magazine now is extremely fragile (the paper quality was very poor), it is one of Aunt Eiko’s prized possessions.  I was so worried the pages would fall apart if I opened up the magazine to scan the pages.  Its odor was typical of old newsprint.  But somehow, the pages stayed together.

This is the original B&W of the cover shot:

Orginal B&Ws of this page:

Aunt Eiko cannot recall why the actual magazine took about a year to be issued.

But what is the connection between a blue dress, food and post-war Japan?

The photographer paid her with “ohagi”.  Out of his food ration. Made out of precious rice and beans.

31 thoughts on “A Blue Dress, Food and Post-war Japan”