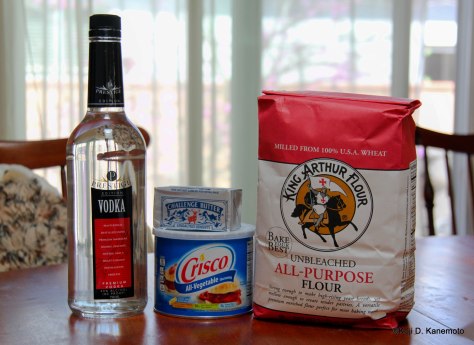 Making a pie crust from scratch is really pretty easy.  Tried it for the first time.

But rolling out the pie dough… Now that’s a bitch.  (Pardon my French.)

Yes, the Cook’s Illustrated recipe called for vodka.  No sense paraphrasing it so this is what they said:

“The problem is that dry pie dough is impossible to roll out. We needed a soft, pliable dough for rolling—that is, one with plenty of liquid—but a dry dough when it came to baking. The solution turned out to be, surprisingly, vodka. By using a quarter cup of ice water mixed with the same amount of chilled vodka, we could add a high amount of liquid and create a dough that was moist enough to roll out easily, but still tender after baking. While gluten forms readily in water, it doesn’t form in alcohol, and vodka is 40 percent alcohol. The alcohol vaporizes in the oven, so that no trace of vodka is detectable in the finished crust.”

Well, it really worked except when this old former mechanic decided to deviate from said recipe by leaving it in the oven to bake for three extra minutes.

And letting the dough get too warm while rolling it… if you call it rolling.  LOL  Instead of being circular, it ended up looking more like Patrick Star of Spongebob.

Let’s get down to the evidence:

Well, the dough certainly was easy to put together.

This (aging) former mechanic did it…but didn’t follow the instructions at the end.  In short:

The secret is the vodka and keeping the ingredients chilled.

Oh.  Don’t burn the crust nor watch Spongebob before rolling.